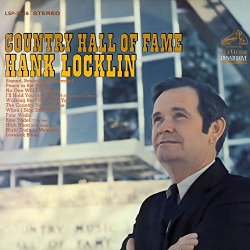 Released in 1966 by RCA Records (my copy is a German pressing on RCA/Telefunken), Hank’s tribute takes a different approach from Wanda Jackson’s album from two years earlier, being centered around the 1967 hit single “The Country Hall of Fame”.

Largely forgotten today, Hank had a substantial career as a songwriter, performer, and occasional hitmaker, although he never was headquartered in Nashville, so he didn’t get as much promotional push from his label, and he never really maintained his own band. He was a huge favorite in England and Ireland making many trips there.

His biggest copyright as a songwriter, “Send Me The Pillow That You Dream On”, was a top five county hit for Hank in 1957 (it had been a regional hit for him in the late 1940s on another label ) and earned him a boatload of money by being frequently covered by other artists such as Dean Martin and Johnny Tillotson both had top five easy listening/top twenty pop hits with the song. Tillotson’s recording also became a top ten or top twenty pop hit in a number of European countries.

As a singer, Locklin was a wobbly Irish tenor whose voice wasn’t a perfect match for every song, but when the right song reached him, he could deliver some really big hits. “Let Me Be The One” spent three weeks at #1 in 1953, and “Please Help Me I’m Falling” spent fourteen weeks at #1 in 1960. Hank had ten top ten hits through spring 1962, but after that Arnold, even the top twenty became nearly impossible for him, until the title song to this album.

When the earlier Wanda Jackson album was released the Country Music Hall of Fame was comprised of the following performers: Hank Williams, Jimmie Rodgers, Roy Acuff, Tex Ritter and Ernest Tubb. By the time Hank’s album arrived there had been multiple inductions (in 1966 and 1967), but of the eight new inductees, four were non-performers. The newly inducted performers were “Uncle” Dave Macon, Jim Reeves, Eddy Arnold and Red Foley.

In selecting songs for this album, Hank and his producers Chet Atkins and Felton Jarvis selected songs by persons either in the Country Hall of Fame or assumed to be inducted in the upcoming years.

The album opens up with “High Noon”, a hit for Frankie Laine, but forever associated with Tex Ritter, who sang the song in the famous movie starring Gary Cooper. Hank’s voice is pitched much higher than that of Ritter, but the song, taken at a slightly faster tempo than Ritter’s version, works. The song has a straightforward country backing with a vocal chorus.

Next up is “Four Walls”, a million seller for the then-recently departed Jim Reeves in 1957.

Track three is the title song, Hank’s last Billboard top thirty country hit, reaching #8. In concept, the song, written by Karl Davis is somewhat similar to an Eddie Dean composition, “I Dreamed of Hillbilly Heaven”, which Tex Ritter took to #5 in 1961, although “Hillbilly Heaven” is a dream sequence song about a mythical place, whereas Karl Davis was inspired by his visit to the actual Country Hall of Fame museum. This song features a full string arrangement by Bill Walker. Although the only song on this album to feature the full string arrangement, such arrangements would become increasingly common in the next few years:

I was roaming round in Nashville in the state of Tennessee
For I love that country music, it’s as soulful as can be
I have gathered there the records for I cherished every name
So I found myself a standing in the Country Hall of Fame

The guitar of Eddy Arnold memories of Cattle Call
Chet Atkins will be with him when the work’s all done this fall
From the autoharp of Maybelle, Wildwood Flower seems to ring
Riley Puckett and Gid Tanner how they all could pick and sing

Side One closes out with Hank’s cover of the “Lovesick Blues”, written by Tin Pan Alley songsmiths Cliff Friend and Irving Mills back in 1922. Emmet Miller (1928) and Rex Griffin (1939) recorded the song, but Hank Williams had the biggest hit with the song in 1949. Countless others, including Patsy Cline, have recorded the song. To really do the song justice, a singer needs to be a good yodeler, and here Locklin yodels the chorus with ease.

Side Two opens up with a mid-tempo take on Roy Acuff’s “Night Train To Memphis” with a modern arrangement (no dobro, banjo or fiddles), but with a bit of the old tent revival show feeling to it.

This is followed by “Sign Sealed and Delivered”, a hit for Lloyd “Cowboy” Copas in 1948). I think the assumption was that Copas would be elected to the Country Hall of Fame eventually, although that has yet to happen. Of the three stars who died in the 1963 plane crash (Copas, Patsy Cline, Hawkshaw Hawkins) Copas was the most famous at the time of his death.

“No One Will Ever Know” was written by Fred Rose, inducted as an executive and songwriter. The biggest hit on the song was by Gene Watson, #11 RW in 1980, although many others have recorded the song, including Hank Williams and Jimmie Dickens. Hank Locklin takes the song at a slow tempo with guitar and piano dominating the arrangement. The vocal choruses are present but not misused. It is a great song and I don’t know why no one has ever had a monster hit with the song

The Jimmie Rodgers classic brag “Blue Yodel #1 a/k/a ‘T’ for Texas” gives Hank a chance to again show off his skill as a yodeler. On this album, Hank one uses the “blue yodel” technique but he was quite capable of doing the “rolling” (or Swiss) technique such as used by Elton Britt, Kenny Roberts and Margo Smith

The album closes with the classic Louvin Brothers hit “When I Stop Dreaming” which finds Locklin at the top of his vocal range, and a nice cover of the Red Foley gospel favorite “Peace In The Valley”.

As was customary for albums of this vintage no musician credits are given, although PragueFrank’s website suggests that the following were present :

I know that Hank Locklin’s voice is not to everyone’s taste but I think most listeners would enjoy this album because of the variety and quality of the songs. Interestingly enough, there is no overlap in songs between this album and Wanda Jackson’s earlier tribute album. I would give this album a B+