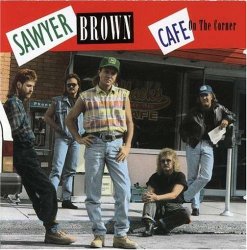 1992’s Cafe on the Corner was Sawyer Brown’s first album after they ended their nearly decade-long association with Capitol Records. Released on the Curb label, it continues along the same path as their previous effort The Dirt Road. Like that collection, it was produced by Mark Miller and Randy Scruggs.

Eight of the album’s ten tracks were co-written by at least one of the band members (mostly Mark Miller), with the other two coming from the pen of Mac McAnally. The first of the McAnally tunes is the title track, which was the lead single. It tells the story of a displaced farmer who is now forced to support himself by busing tables in a corner cafe and serving coffee to customers who were similarly affected by the recession that America was facing at that time. It peaked at #5 but deserved to go all the way to the top and I’m not sure why it didn’t. Also peaking at #5 was the follow-up single “Trouble on the Line” written by Mark Miller and Bill Shore. The third single, “All These Years” charted slightly higher at #3. Sawyer Brown is not well known for their ballads, but this Mac McAnally composition is a beautiful ballad about a husband confronting his cheating wife and the brutally honest conversation that takes place in the aftermath of his discovery. Featuring a nice cello arrangement, it was also a minor Adult Contemporary hit where it became Sawyer Brown’s only entry on that chart, peaking at #42. McAnally had released his own version of the song earlier that year.

The rest of the album’s songs generally lack the substance of the title track and “All These Years” but they are well performed — particularly “Travelin’ Shoes”, “A Different Tune” and “Chain of Love” (not the Clay Walker song of the same name from a few years later). “A Different Tune” in particular includes some wonderful guitar picking and steel guitar playing. The album is one of Sawyer Brown’s more traditional efforts, without the poppiness of their early work — at least until we reach the last two tracks. Gospel artist and Nashville session singer Donna McElroy lends her voice to “I Kept My Motor Running”, an R&B-inflenced number written by Miller, Greg Hubbard and Randy Scruggs, that I did not care for at all. I was also rather unimpressed with the closing track “Sister’s Got a New Tattoo” about a young woman who shocks her family by joining the military. It’s not a terrible song but not up to the standards set by the album’s first eight tracks.

Cafe on the Corner is a solid effort that I was ready to grade an A until it suddenly detoured with the last two tracks. It is still a worthwhile effort, however, and is available for streaming.