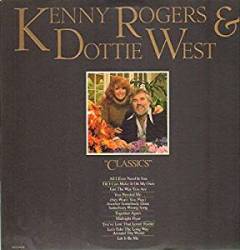 Male-female duets still exist today, although usually in the form of acts that always (or nearly always) perform as duets. Acts that normally perform as solo acts may combine for a song or two (“Special Events”), but rarely do they issue albums of duets

The album Classics, released in 1979, was the second (and final) album of duets released by the unlikely pairing of Kenny Rogers and Dottie West. Kenny, of course was a country & pop superstar but Dottie West was a veteran second-tier country artist, whose 1978 album with Kenny (Every Time Two Fools Collide) would trigger a brief renaissance on the United Artists/Liberty label.

I am not sure why this particular pairing came about, although I have some suspicions. United Artists was not a major player in country music and did not have a deep roster of female artists. Billie Jo Spears, arguably the leading female country singer on the label, did not have a voice that would blend well with Kenny’s voice.

The recently signed Dottie West, on the other hand, had a track record of being able to blend and harmonize with male singers. Her track record at RCA had included successful recordings with such diverse singers as Jim Reeves, Don Gibson and Jimmy Dean. Dottie’s first album and the second album, released on the heels of the first duet album, did not produce any top fifteen hits but the first duet album did produce a #1 and a #2 single.

That brings us to this album, a collection of some county songs, some borderline pop-country-easy listening songs and some pop songs. Produced by Larry Butler, the album was not quite as successful as its predecessor duet album, but still sold over two million copies.

The album opens up with “All I Ever Need Is You”, a top ten pop hit and #1 Adult Contemporary hit for Sonny & Cher and a top twenty county hit for Ray Sanders, both versions in 1971. This version would rise to #1 on the country chart. While not as country as the Sanders version (still my favorite), it is not as pop as the Sonny & Cher versions. Both steel guitar (by Pete Drake) and string arrangements are featured in the arrangement. The song works well as a duet.

Sometimes when I’m down and all alone
Just like a child without a home
The love you give me keeps me hangin’ on
Oh honey, all I ever need is you

The Wynette, Richey, Sherrill composition “ ‘Til I Can Make It On My Own” is up next. The song was a #1 country hit for Tammy Wynette in 1976. The song works as a duet but is in a key where Kenny seems to be struggling to hit some of the notes.

“Just The Way You Are” was a #3 Billboard / #2 Cashbox top ten pop hit for writer Billy Joel in 1977. The arrangement of this song reeks of cocktail lounge balladry. I’d rather hear Billy Joel perform this song and I am no fan of his music.

Randy Goodrum penned “You Needed Me”. Goodrum would co-produce Dottie’s 1979 album Special Delivery and write six of the songs on that album. I think that this song, as recorded by Anne Murray (#1 pop / #4 country), , was his biggest hit as a songwriter. The arrangement on this one is definitely easy listening.

“(Hey Won’t You Play) Another Somebody Done Somebody Wrong Song” was made famous by B.J. Thomas, winning the 1976 Grammy Award for Best Country Song. The song’s writers, Larry Butler and Chips Moman definitely cleared the bases with this song as it went to #1 on the country, pop and A/C charts in the US, nearly duplicating that success in Canada. Kenny & Dottie do a nice job with the song although the arrangement can be best described as ‘countrypolitan’. Steve Glassmeyer is featured on soprano sax.

Hey, wontcha play another somebody done somebody wrong song
And make me feel at home while I miss my baby, while I miss my baby
So please play for me a sad melody
So sad that it makes everybody cry-why-why-why
A real hurtin’ song about a love that’s gone wrong
Cause I don’t want to cry all alone

There is no questioning the country credentials of the next song, “Together Again” written by the great Buck Owens. Although initially released as the B side of Buck’s 1964 single “My Heart Skips A Beat”, most disc jockeys played both sides of the record resulting in both songs reaching #1, although in different weeks.

Unfortunately, the song is given an easy listening arrangement with strings and keyboards and not a trace of a steel guitar in the arrangement. There is a key shift whenever Kenny takes over from Dottie in singing a verse. I liked Dottie’s vocal on the song, Kenny’s not so much. The net effect is really disappointing.

Paul Craft was a successful songwriter who penned “Midnight Flyer”. The song is probably best remembered for Eagles recording of the song, although the song entered the realm of bluegrass music
through the Osborne Brothers terrific single recording of the song in 1973. Producer Butler gives the song the (fairly) acoustic arrangement the song demands. Kenny & Dottie acquit themselves well on this song.

Barry Mann and Cynthia Weil were a highly successful songwriting team and Phil Spector was a successful producer and occasional songwriter best known for his ‘wall of sound’ production style. “You’ve Lost That Lovin’ Feelin'” was certainly the biggest hit that the Righteous Brothers would ever have, and possibly the most successful song from the Mann-Weil songwriting team. After hearing the Righteous Brother’s version it is difficult to accept any of the cover versions, of which there have been many. Kenny & Dottie do a decent job with the song, which is given a somewhat subdued ‘wall of sound’ production, but it pales in comparison to the original.

“Let It Be Me” is a popular song originally published in French in 1955 as “Je t’appartiens”. Written by Gilbert Becaud & Pierre Delanoe, the song became a worldwide hit when Manny Curtis appended English lyrics to the song. The Everly Brothers (#7 pop – 1960) and a duet by Betty Everett and Jerry Butler (#5 pop – 1964) cemented the song’s popularity in the English speaking world. In 1969 Glen Campbell and Bobbie Gentry had a pop and country hit with the song. Kenny and Dottie sing the song quite well – I think Kenny’s best vocals on this album are to be found on this song. The song is not country, the arrangement is very orchestral, but the net effect is very nice.

Like most of Kenny’s albums, this is essentially a pop album with a nod toward country music. There would be no more duet albums by this pair and after a brief resurgence in 1979 through early 1981, Dottie’s solo career would fade away (not surprisingly as Dottie would turn 50 in 1982). The younger Rogers (b. 1938) would continue to have varying degrees through the end of the 1980s, followed by a long coda.

I like parts of this album, but there are tracks I tend to skip over – I give it a C+