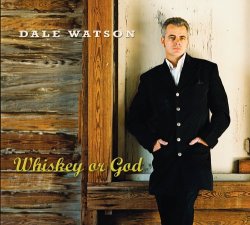 Whiskey or God, released on Palo Dura Records in 2006 is exactly the same album as Heeah!!, which was issued on the Continental Song City label in 2005. Same songs, in the same sequence – if you have one album, you don’t need the other – but you should have one of them. Heck – buy ’em both and keep one as a spare!

Regardless of which title the album has, it is a great album which finds Watson delivering fourteen songs with the fire and passion he typically invests in all of his recordings.

The album opens with sad but upbeat “Sit And Drink And Cry.” Fabulous steel guitar and fiddle dominate the background. Watson’s forlorn lead vocal is forlorn in a very upbeat way,

The second track “Whiskey Or God” is pretty self-explanatory

“I Don’t Feel Too Lucky Today” is a song Merle Haggard, Bob Wills or Asleep At The Wheel would have been proud to record. Dale wrote this mid-tempo ballad and the song has lovely steel/fiddle tandem work.

“No Help Wanted” is the story of an unemployed truck driver, stuck in Pittsburgh perusing the classified ads but finding nothing.

Next up is a tender love ballad “My Heart Is Yours”

It’s been through hell and back
Been broke showin’ cracks
But it’s yours, my heart is yours

It’s been a while since it had to feel
Love shy and newly healed
But it’s yours, my heart is yours

Let’s take it easy, it’s easy to see girl
It still ain’t that strong
It’s barely beaten from being so beaten
For so long

It’s been through hell and back
Been broken, showin’ cracks
But it’s yours, my heart is yours

This is followed by “It Hurts So Good”, another song that has a strong western swing feel.

There aren’t too many songs about truck drivers who are transvestites or drag queens but Dale has never lacked for courage and takes an entertaining stab at the topic with “Truckin’ Queen ( I Got My Nightgown On)”. I suspect that this one never got any airplay.

“Darlin’ Look At Me Now” is another song about a guy who is nuts about a girl – nothing special in terms of either the lyrics or arrangement but certainly more than mere filler.

“I Wish I Was Crazy Again” is the first track on the album in which the trombone is prominent as an accent. The song reminds me of something Haggard might have written, and that is never a criticism, because I have never heard a bad Merle Haggard song, This song is taken at a medium -slow tempo

You left me, I left too
I went right out of my head
The old boy they all knew
They all knew was pretty much dead

You know, they say I went crazy
And by “crazy” I mean mentally insane
I had a world where I still had you
Oh I wish I was crazy again

Crazy again, crazy in love
Ignorantly bliss baby
That’s what dreams are made of
There was no hurtin’
I lived life without pain
You’d still be in my arms baby
If I was crazy again

I’ve never really associated Dale Watson with Cajun music, but here he proves that he is no stanger to the genre with happy and danceable “I Ain’t Been Right, Since I’ve Been Left.” Don Raby really kicks this one off with a great Cajun fiddle introduction.

Dale slows down the tempo with “Tequilla and Teardrops” which again features brass and a subdued mariachi feeling.

When I was single forty some-odd years ago I was often looking for “38..21..34” but rarely found it and when I did find it, I quickly realized it wasn’t that important. It’s a fun upbeat medium-fast song there Hank Williams song “Hey Good Looking” is sampled in the lyrics

“Outta Luck” is a honky-tonk romp about a fellow who keeps plugging along but can’t apparently catch a break , although it is unclear whose fault that is, he doesn’t necessarily blame himself or anyone else but knows he needs a change of scenery.

“Heaah!!” is the title song for that album as it was released in Europe. Jon Blondell’s trombone gives the song the feel of a big band or perhaps the feel of one of Bob Will’s larger, jazzier bands.

This is a very strong album that works the line between honky-tonk and western swing, with more lean toward western swing. The band is crisp throughout and I wouldn’t regard any of the songs as misses, and Dale’s vocals are strong throughout with any missteps.