A person surveying the country music scene at the beginning of 1973 could be forgiven for thinking that David Houston was en route to a career that would culminate in eventual induction into the Country Music Hall of Fame. His most recent single, “Good Things,” would reach #1 on Cashbox and complete a decade in which 13 of his singles topped one or more of the Billboard, Cashbox and/or Record World country charts. His 1966 hit, “Almost Persuaded,” was the biggest country hit of the decade (1966-75) and another 17 singles cracked the top 20 during that span. Eight of his songs cracked Billboard’s pop charts.

Instead, Houston’s career would come to a screeching halt with only two more top 20 singles to follow.

Charles David Houston (December 9, 1935 – November 30, 1993) was born and died in Bossier City, Louisiana. Between those dates, he compiled a career worthy of his antecedents who include former Revolutionary War hero (and Virginia governor) “Lighthorse” Harry Lee, General Robert E. Lee and Texas hero Sam Houston. His godfather, 1920s pop singer Gene Austin (“My Blue Heaven”), co-owned an auto dealership with Houston’s father and took an active role in encouraging David’s musical career. Like Gene Austin, Houston was very much at home with pop music. Eventually, he came to the attention of Slim Whitman, who recorded his first session in 1955 and got him placed on Imperial Records. A spot on the Louisiana Hayride soon followed.

The contract with Imperial didn’t lead anywhere, nor did subsequent recording contracts with RCA and Atlanta-based National Recording Corporation. Finally, in 1963, Tillman Franks, former manager of Johnny Horton and Claude King, pitched a song to Houston and got him on the Epic label. The song, “Mountain of Love” (not the same song that Johnny Rivers and Charley Pride recorded), rose to #2 on Billboard. After a couple of minor hits, Billy Sherrill took over Epic’s Nashville operations and provided Houston with a song he penned (with Glen Sutton) titled “Livin’ in a House Full of Love,” which hit #3 in late 1965.

In 1966, Sherrill had Houston record a waltz that he and Glen Sutton had written as a possible B-side. The song, a tale of a married man struggling (and succeeding) in fighting off temptation, became an A-side and a sensation. “Almost Persuaded” jumped to #1 that August and spent nine weeks at the top of Billboard’s country chart and reached #24 on the pop chart (no record since 1966 has topped the country charts for as long a period). Aided by the piano signatures of Hargus ‘Pig’ Robbins, “Almost Persuaded” garnered two Grammys for Houston (Best Country & Western Recording and Best Country & Western Performance, Male) in 1967. The CMA Awards did not start until the next year so his biggest record went unrecognized by the CMA.

“Almost Persuaded” launched a string of hits that lasted through 1973 and created the template that Sherrill used on his future recordings with Tammy Wynette, George Jones and numerous other artists. Sometimes referred to as “country cocktails,” the Sherrill arrangements would come to dominate country music until the outlaw movement came to the fore in the mid ’70s. Such David Houston solo hits as “With One Exception” and “You Mean the World to Me” (1967); “Have a Little Faith” and “Already It’s Heaven” (1968); “Baby, Baby (I Know You’re a Lady)” (1970); and the 1967 duet of “My Elusive Dreams” with the then-largely unknown Tammy Wynette served to demonstrate how well the arrangements could work in the hands of an expressive singer. Along the way, Houston also provided Barbara Mandrell with her first major hit in “After Closing Time” (#6 in 1970). END_OF_DOCUMENT_TOKEN_TO_BE_REPLACED 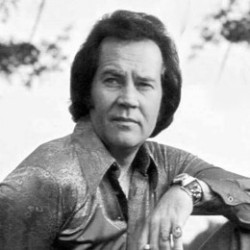 During the early 1970s the airwaves of country radio electrified listeners with the sound of “Gwen (Congratulations)” and “I Don’t Know You Anymore,” records that did not sound like anything else playing on radio at the time.

Tommy Overstreet was born September 10, 1937, in Oklahoma City, Oklahoma, but raised in Houston and Abilene, Texas. While growing up, he was always around music and was hugely influenced by a relative of his, Gene Austin, who was a major pop star during the 1920s, with one of his hits, “My Blue Heaven,” selling over 5 million copies. Austin, sometimes reported as being Overstreet’s uncle but was actually his third cousin, encouraged him in his musical endeavors. Paul Overstreet, a country songwriter of some significance, if related at all, would be a very distant relative of Tommy Overstreet.

During his teen years, he began performing pop music on radio stations in the Houston, TX area and appeared in a musical titled Hit the Road. While studying broadcasting at the University of Texas, he began playing in local clubs under the name Tommy Dean and toured frequently with Austin.

After time in the US Army, Overstreet moved to Los Angeles in the early ’60s to begin his songwriting (he has written over 500 songs) and recording career. He then returned to Texas and began appearing on the Abilene TV program The Slim Willet Show and formed his own group to play club dates and venues throughout western Texas.

His big break came in 1967 when he was hired to manage Dot Records in Nashville, TN. His connections at Dot enabled him to pursue his recording career. His first two Dot singles, issued in late 1969 and late 1970, barely made a dent, reaching #73 and #56, but in 1971 the third and fourth singles “Gwen (Congratulations)” and “I Don’t Know You Anymore” exploded on the scene both reaching #1 on Record World’s country charts (and becoming Top 5 records on Billboard and Cashbox). In 1972 Overstreet continued his streak with his biggest record “Ann (Don’t Go Runnin’)” (#2 Billboard/#1 Cashbox), “A Seed Before The Rose” only reached #16, then back into the Top 10 with 7 consecutive Top 10 singles, topped by “Heaven Is My Woman’s Love” (#3 Billboard/#1 Cashbox). Tommy’s last Top 10 occurred in 1977 when “Don’t Go City Girl on Me” reached #5; however, he continued to chart records until 1986, although nothing after early 1980 reached the top forty.

Overstreet remains active as a concert performer and is still an occasional recording artist, including recording gospel music. His popularity in Europe continued long past his American success and he toured Europe many times over the years.

There were 12 Tommy Overstreet Albums issued by Dot/ABC and three on the Elektra label. All of these albums find Tommy in good voice; however, the albums seem to become less country as time progresses. I consider the Dot albums issued through 1975 as being substantially better than those that came later. After his runs with Dot and Elektra, Overstreet landed on minor labels where he either remade his earlier hits, or dipped back into the days of vaudeville for material such as his 1984 album Memories Old and New (Deja Vu DJV-137 1984).

Like many country artists of the 1970s, Tommy Overstreet is poorly represented on CD. In 1998 Varese issued The Best of Tommy Overstreet, which collects Tomnmy’s 16 biggest hits, in their original versions. Unfortunately, this CD has gone out of print and has been replaced with another and inferior Varese CD Twenty Classic Hits, issued in 2008 and consisting of remakes.

The Ernest Tubb Record Shop has one other CD available of Tommy’s secular material Heaven Is My  Woman’s Love. This CD contains twenty songs with half the titles being Tommy’s hits and half being miscellaneous songs. From the samples on Amazon, these appear to be remakes.

Speaking of Amazon,   www.amazon.com has ten of Tommy’s CDs titles available (new and/or used)   plus some digital downloads

Tommy is on My Space   www.myspace.com/tommyoverstreet  and apparently an official website is under construction.

For part five of this series, as always, just some songs I liked, one song per artist, not necessarily the biggest hit, (although I feel free to comment on other songs by the artist).

A nice country cover of an old gospel song – how could you go wrong with this duo? Jody Miller would have a number of hits during the 1970s, although her single biggest record was in 1965 when “Queen of The House” (an answer song to Roger Miller’s “King of The Road”) went #12 pop / #5 country. I don’t know that Jody viewed herself as a country singer, but she had a sassy & sexy voice and was quite easy on the eyes.

Roger Miller’s career had largely run out of steam by this time, but the imagery in this song makes it one of my favorites. Alas, this song only reached #38. Roger would experience a significant renaissance in the mid-1980s writing the music for the Broadway play Big River.

I have no idea why this song charted country as Frank Mills was an orchestra leader and this instrumental song was no more country than Lady Gaga. It was a huge pop hit reaching #3 and selling millions in the process.

Written by Eddie Rabbitt, this was Ronnie’s first #1. How can you not like a song that contains a line like “Milk and honey and Captain Krunch and you in the morning?”