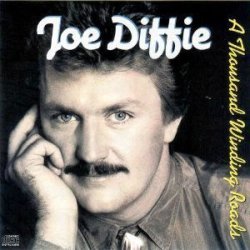 Joe’s debut solo album was released on Epic in 1990, and immediately propelled him to stardom; overnight success (at the age of 32) which was thoroughly deserved, because this is an excellent album, and a fine exemplar of the neotraditional movement which all too briefly dominated the genre. It was produced by Bob Montgomery (then also working with Vern Gosdin) and Johnny Slate. They provided a sympathetic backing which showcased Joe’s vocal prowess.

The lead single ‘Home’ (written by Andy Spooner and Fred Lehner), which has the disillusioned protagonist looking wistfully back to his childhood, took Joe right to the top of the charts. It set records as the first ever debut single to hit #1 on all three of the major charts then in existence (Billboard, Radio & Records, and Gavin). The nostalgia feeds on the protagonist’s disillusionment about the dreams he has been pursuing:

Now the miles I put behind me ain’t as hard as the miles that lay ahead
And it’s way too late to listen to the words of wisdom that my daddy said
The straight and narrow path he showed me turned into a thousand winding roads
My footsteps carry me away, but in my mind I’m always going home

The pained ballad ‘If You Want Me To’ was almost as successful, reaching #2 in 1991, and is my personal favorite of the four singles from this project. One of Joe’s own songs (written with Larry Williams), it was the first showcase of the apparently effortless slide between registers which is Joe’s most remarkable gift as a vocalist, as the narrator gently tells his beloved he is prepared to do whatever she wants from him, even if:

‘If The Devil Danced (In Empty Pockets)’, written by Kim Williams (Larry’s brother) and Ken Spooner, took Joe back to #1, with its witty western swing twist on being broke and too easily swayed by a persuasive car salesman. The optimistic final single was written by Joe with his friend and regular co-writer Lonnie Wilson (who also plays drums and sings backing vocals on the album), about finding a ‘New Way (To Light Up An Old Flame)’. The only really happy song on the album, it was another #2 Billboard hit, and cemented Joe’s status as one of the brightest new stars of the early 90s.

One drink’s too many
Ten ain’t enough
Lord, but she’s still here
So I’ll have one more

More western swing is on offer with the similarly themed ‘Liquid Heartache’, another of Joe’s songs, this one written with the veteran Red Lane, with a great groove which really lets the musicians stretch out.