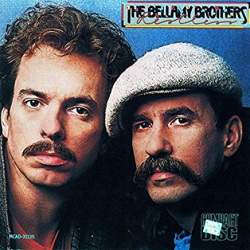 Although the New Traditionalist movement would not get fully underway until 1986, there were some signs of the changes that to come as early as 1984. That was the year that The Judds enjoyed their first #1 hit with “Mama He’s Crazy” and Reba McEntire received both critical accolades and commercial success with My Kind of Country, while George Strait and Ricky Skaggs continued to keep traditional country on the radio.

1984 also saw some changes for The Bellamy Brothers, although they moved in the opposite direction, with more layered production and pop elements than had previously been the case with their music. The change was likely precipitated by a change of co-producers, with Steve Klein taking over for Jimmy Bowen, a switch that was probably brought about by a change in label affiliations. In the 1970s and 1980s Curb Records was not a standalone label; they typically partnered up with a larger label to distribute and promote their artists. Up to now, the Bellamys’ albums were released jointly by Curb and either Warner Bros. or Elektra, but beginning in 1984, their music was released by MCA/Curb.

Restless, their first release under this new arrangement, was warmly received by radio, with all three of its singles reaching the Top 10 or better. “Forget About Me” (which I actually had forgotten about) reached #5. The very mellow “The World’s Greatest Lover”, complete with its Kenny G-esque saxophone, reached #6 and “I Need More of You” — the best of the three — climbed all the way to #1, becoming the duo’s seventh country chart-topper. “Forget About Me” was written by Frankie Miller, Troy Seals and Eddie Setser, while the other two singles came from the pen of David Bellamy.

Overall this is a very mellow album with mostly mid-tempo numbers, with “Rock-A-Billy” — which is exactly the kind of song its title suggests — and the title track being notable exceptions. The poppy and lyrically-light “I Love It” is a very catchy toe-tapper. “Diesel Cafe”, about a run-down greasy spoon truck stop has a melody that reminds me of Alabama’s “Christmas In Dixie.” I did not care for the reggae-flavored “We’re Having Some Fun Now.”

While there is nothing truly objectionable on Restless, it seems to be somewhat of an opportunity for the duo to explore other musical styles, which unfortunately results in them straying a bit too far at times from their country roots. I wouldn’t necessarily go out and buy this one, but it is worth streaming.

Released in 1982 by Elektra/Curb, Strong Weakness was the fourth studio album released during the 1980s and by the eighth overall studio album release. Buoyed by some strong singles, the album was the fifth straight top twenty country albums chart release for the brothers.

The copy of the album I am using for this review is a cassette tape which means the song sequence may vary from the vinyl or CD releases of the album and the information on the packaging is minimal.

The album opens up with “Strong Weakness” which was the fourth single and least successful single released from the album, topping out at #15. Written by David Bellamy, the song has a loping beat with relatively simple instrumentation (there is a nice steel guitar break) and a melody that is not terribly memorable by Bellamy standards.

I’ve got a strong weakness
Baby, I’m gone on your sweetness
Oh baby, stoned on your love
I’ve got a chillin’ fire

You’re good when you’re bad.
I’ve got a strong weakness
Baby, I’m gone on your sweetness
Oh baby, stoned on your love

Next up is “Doin’ It The Hard Way”, a gentle slow ballad about the ups and downs of a relationship. It’s a nice song but nothing that would ever be considered for release as a single.

“When I’m Away From You” was the second single released from the album, soaring to #1. The song was written by Scottish rocker Frankie Miller (not to be mistaken for the American country singer who hit in 1959 with “Family Man” and “Black Land Farmer”) and previously recorded by Kim Carnes. The imagery of the lyrics is very interesting:

When I’m away from you
Well, I can’t stay still
My thoughts won’t move from the way I feel
It happens time and time again
And the circle never ends

When I’m away from you
Well, it hurts to say
My sense has gone so far away
I’m up all through the night
And I can’t tell wrong from right

“I Love Her Mind” was the third single off the album and reached #4. Written by David Bellamy the song features a Jamaican beat but is otherwise a slow ballad. I’m not sure you could get away with these lyrics in today’s overly politically correct environment, but the concept is interesting:

Though her body is immortal
I love her mind

“Number Two” is mid-tempo song told from the perspective of a man who knows that he is not the man of his woman’s dreams.

I’m not saying that the Bellamy Brothers presaged “Murder On Music Row” with “The Night They Killed Country Music” but the concept is close. I could not find the lyrics for this song but there is a video clip available on the internet.

“Long Distance Love Affair” revisits a familiar theme, in fact there are a number of songs with this title. This song is presented as a very country ballad.

The album ends with “Redneck Girl” which was the first single off the album. This up-tempo song, written by David Bellamy sailed to #1 and is perhaps the most memorable song off the album, with strong lyrics and an easily remembered melody. The song remained a favorite of bar bands for over twenty years and has a staple of country dance clubs seemingly forever

Hey, redneck girl likes to cruise in Daddy’s pickup truck
And a redneck girl plays her heart when she’s down on her luck
Living for a Friday afternoon
She’s gonna show one ole boy that weekend moon

A redneck girl got a name on the back of her belt
She’s got a kiss on her lips for her man and no one else
And a coyote’s howling out on the prairie
First comes love, and then comes marriage

While not every song on the album is great, all of the songs are at least good and, for the most part, this is an unmistakably country album which I would rate as a B+ or A-

Whatever optimist gave this album its title jumped the gun just a little, for although it marks the official beginning of Jessi Colter’s recording career (not counting two prior singles issued under her birth name), it would be another five years before her commercial breakthrough that propelled her to stardom.  Released in 1970, A Country Star Is Born was her first and only solo album for RCA.  She was presumably signed to the label because her husband Waylon Jennings was already on its roster, but the album’s  lack of commercial success suggests to me that she perhaps was not a huge priority for RCA.

The album was produced by Chet Atkins and Waylon Jennings, and upon the first listening, one might be a bit confused as to why it didn’t perform better in the marketplace.   In order to understand why, one has to bear in mind the way it would have been perceived back in 1970.   The album follows the standard practice of the day of using one or two hit singles to drive sales and padding it with covers of recent hits for other artists and perhaps some original songs by the artist and/or producer.   In this case, the lead (and non-charting) single was one of Jessi’s original compositions “I Ain’t The One”, performed as a duet with Waylon.    The second single was “Cry Softly”, another Colter original that also failed to chart.  Its melody is somewhat similar to “I’m Not Lisa”, which would become her breakthrough career record a few years later.  It’s a decent song that might have enjoyed some success if a more established artist had released it.

Filling out the rest of the album are three more songs Jessi wrote — all credited to her real name Miriam Eddy:  the uptempo “If She’s Where You Like Livin'”, the mid tempo “Don’t Let Him Go”, and the bluesy “It’s All Over Now”, none of which were strong enough to be considered for release to radio.  Along with these originals are two excellent songs written by Harlan Howard, which might have had hit potential had they not been relatively recent releases for other artists.  “Too Many Rivers” had been a Top 20 pop hit for Brenda Lee in 1965 and “He Called Me Baby” had been a minor posthumous hit for Patsy Cline in 1964.  The latter would go on to be recorded by many other artists and would eventually (with a pronoun change) become a big hit for Charlie Rich in 1974.   The album’s best track “It’s Not Easy” had previously been recorded by its composer Frankie Miller.  “Healing Hands of Time” was a non-charting Willie Nelson single from 1965.

I enjoyed all of the album’s songs, but I get the distinct impression that RCA only made a half-hearted effort to promote it.  Pairing her up with Waylon for her first release was a reasonable strategy.  It’s surprising that “I Ain’t The One” didn’t at least enter the charts.  A great song it is not, but his star power at the time was sufficient that it should have garnered some attention from radio.  When it failed, it was almost inevitable that the next single would also tank, since Jessi Colter was still an unknown entity.  Why they didn’t have more songs to try and promote her is somewhat puzzling.

RCA released two more solo singles in 1971 and 1972  (not on this album) — including “I Don’t Want To Be a One Night Stand” which would become Reba McEntire’s debut single a few years later.  There were also two minor hit duets with Waylon (“Suspicious Minds” and “Under Your Spell Again”), but it would be five years and a label change later before the world learned who Jessi Colter was.

A Country Star Is Born is available for download and streaming and is worth a listen.