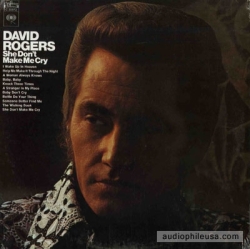 An updated version of an article originally published by The 9513:

Born in Atlanta, Georgia, during the depths of the Great Depression, Rogers began playing guitar when he was eleven, and shortly thereafter began appearing in local bands. He successfully auditioned for Roger Miller in 1956, but was drafted before getting the opportunity to join Miller’s band.

In 1962, after Rogers’ was discharged from the service, he landed a regular gig at the Egyptian Ballroom–a gig which lasted several years. While performing there he recorded a demo tape which eventually came to the attention of Frank Jones at Columbia, and a recording contract was not far behind.

With that array of artists (which doesn’t even count those on sister label Epic), there simply wasn’t much promotional oomph left for the likes of an aging bar-band singer, and so the recording of Roger’s albums was left to independent producer Pete Drake.

Drake, a great steel player famous for his “talking” steel guitar, used the “Country Cocktail” production style of Billy Sherrill and Glenn Sutton on Rogers’ records. Background vocals and symphonic strings were heavy, but because of Drake’s personal instrumental specialty, steel guitar played a far more prominent role than in the typical Sherrill or Sutton production.

Rogers’ first single, “Forgiven Fruit,” was release in 1967, but failed to chart. The next single, “I’d Be Your Fool Again,” checked in at #69, and the one after that, “I’m In Love With My Wife,” (bundled with “Tessie’s Bar Mystery”) finally cracked the top 40. Progress was slow but steady. In 1969, “A World Called You” hit #23. Meanwhile, Rogers made his debut on the Grand Ole Opry and started appearing regularly on the WWVA (Wheeling, WV) Big Jamboree, where I first heard him many Saturday nights on the radio.

Rogers’ breakthrough hit was 1970′s “I Wake Up In Heaven”, which peaked at #19 on the Cashbox Country Chart (Billboard had it at #26). The song was very strong in selected regional markets, hitting #1 in places like Orlando, FL, and Norfolk VA. The follow-up single, “She Don’t Make Me Cry” (#19 Billboard / #4 Cashbox) continued the upward momentum, and “Ruby You’re Warm” held place (#21 Billboard / #13 Cashbox).

According to Billboard, the next single, 1972′s “Need You,” was Rogers’biggest hit, reaching #9 (it went to #5 on Cashbox and, again, hit #1 in many markets). (“Need You” was a remake of the 1958 Donnie Owens pop hit and is, in fact, my favorite David Rogers recording.)

After that peak, Columbia apparently lost interest in Rogers as his next two singles barely cracked the top 40 on either Billboard or Cashbox. By 1973, Rogers was off Columbia and had signed with Atlantic Records, hardly a power in the world of country music, though the label was trying to penetrate the country market as they signed Willie Nelson at this time.

Atlantic actually had more success with Rogers than with Nelson –- Rogers achieved one top ten single with the late 1973 single “Loving You Has Changed My Life,” which peaked at #9 on both Billboard and Cashbox in January 1974.

Both Nelson and Rogers were gone from Atlantic by the end of 1974. Nelson, of course, went on to bigger and better things, but Rogers would slowly fade from the public eye. After recording one album for United Artists, he moved on to a series of minor labels including Republic, Kari, Music Master and Hal Kat, where he charted singles until 1984, with only 1979′s “Darling” cracking the top twenty.

Unfortunately, to the best of my knowledge, none of David Rogers’ albums have ever been issued on CD, so you’ll need to do vinyl hunting (there may be some digital download available).

The three Columbia albums (A World Called You, She Don’t Make Me Cry and Need You) are quite good, especially the latter two. The Atlantic albums, which were again produced by Pete Drake, are also worthwhile, though they differ from the Columbia albums in that most of the “Country Cocktail” trappings were abandoned.

My favorite album from the Atlantic years is Farewell To The Ryman, issued in 1973 to commemorate the Opry’s move to Opryland. The track-list is a cornucopia of classic country songs: “Blue Moon of Kentucky,” “Great Speckled Bird,” “I’m Movin’ On,” “I Can’t Help It,” “Walking The Floor Over You,” “Send Me The Pillow That You Dream On,” “Rollin’ In My Sweet Baby’s Arms,” “Release Me,” “Mexican Joe,” “Wondering,”, “I Walk The Line,” and “Satisfied Mind.”

Aside from the Republic records, Music Master issued one Rogers album titled The Best of David Rogers, a two record set comprised of 11 re-makes of his Columbia and Atlantic hits and nine new songs written by Harold Shields. The new songs aren’t bad; two of them–”Hold Me” and “Crown Prince of the Barroom”–charted, and the remakes are decent, finding Rogers in good voice.

In addition to the albums David Rogers charted 37 of the 45 rpm singles plus there are an untold number of uncharted singles. Used record stores may carry some of these records but the best place to look is http://www.musicstack.com 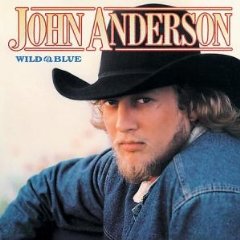 Wild And Blue was John Anderson’s fourth album, released in 1982, and it provided the springboard for a major change in his career.

It was produced, like I Just Came Home To Count The Memories, by John with the Canadian Frank Jones who had worked with some of the all-time greats, including, at various times, Lefty Frizzell, Marty Robbins, Ray Price and Johnny Cash. The sessions which resulted in this album were the last ever recorded at the legendary Columbia Studio B, which was demolished immediately afterwards. Most of the album was in the solidly country style John had become known for in the past few years, but there were a couple of tracks where he took a new turn.

The title track is a carefully crafted song written by John Scott Sherrill, with a clever play on words (“They could just take you up to yonder, honey, you’re already wild and blue”), pained, wailing vocal, and fiddle-heavy arrangement. The complex lyric depicts a troubled woman yearning for a man she can’t have, with the narrator asking,
“Way across town a phone rings off the wall
If you know he ain’t home why do you keep calling?”
She then seeks some kind of tawdry satisfaction with other men – and only in the last verse do we find that the narrator is this woman’s husband, when he pleads,
“It’s four in the morning and you’re all alone
With no place to go, you know you ought to come home”.
The lead-off single from the set, it was John’s first #1 hit, a major achievement but one soon to be overshadowed.

END_OF_DOCUMENT_TOKEN_TO_BE_REPLACED 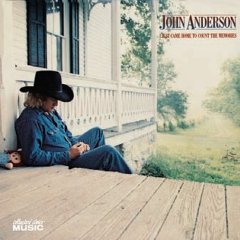 John Anderson’s third outing for Warner Brothers found him sharing production duties with a new co-producer, Frank Jones, and showcasing a slightly more polished sound. This is most apparent on songs such as the title track and “When Lady Is Cloudin’ Your Vision”, which feature a string section, something that hadn’t been typical of Anderson’s recordings up to that time.

The title track had previously been recorded by Bobby Wright in 1975 and had been a moderate hit for Cal Smith in 1977. Anderson’s 1981 version, in addition to the string section, finds him toning down the twang just a bit, possibly as a concession to country radio’s tastes at the time. It seems to have paid off; “I Just Came Home To Count The Memories” reached #7 on the Billboard country singles chart, helping Anderson rebound nicely after his previous single “I Love You A Thousand Ways” had stalled at #54. His inconsistent performance at radio continued, however, when the next single, “I Danced With The San Antone Rose”, failed to chart. Despite a poor reception at radio, it is a beautiful song, penned by Anderson and Lionel A. Delmore, and it is one of my favorites on the album.
END_OF_DOCUMENT_TOKEN_TO_BE_REPLACED