Album Review: Craig Morgan – ‘A Whole Lot More To Me’

Leave a comment Posted by Jonathan Pappalardo on June 30, 2016 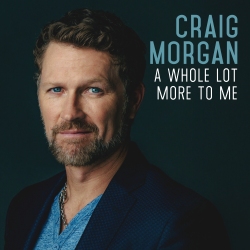 For his seventh album, A Whole Lot More To Me, Craig Morgan wanted to craft a record that broke down genre stereotypes and cast him in a new light. It’s his first album of original material in four years as well as his second album for Black River.

The first single, “When I’m Gone” was released back in September and peaked at #48. Written by Justin Ebach and Steven Dale Jones is an optimistic banjo-driven uptempo about wanting to be remembered as someone who lived life to the fullest.

The second single, released in May and yet to chart, is the power ballad “I’ll Be Home Soon” written by Ebach, Jones and John King. The lyric is typical of modern country love songs, but Morgan brings an emotional gravitas that elevates the song to just above generic.

Morgan had a hand in co-writing five of the album’s twelve tracks. “Living On The Memories” is a bombastic power ballad he collaborated on with Scott Stepakoff and Josh Osborne. Mike Rogers joined him for the title track, where he goes out of his way to debunk his country boy image with an interesting laundry list of illustrations emoted by a vocal that could’ve been toned down a few notches. “I’m That Country” walks everything back by devolving into Morgan’s typical style. “Remind Me Why I’m Crazy” is an excellent ballad about lost love with a cluttered treatment that intrudes on my overall enjoyment. Morgan’s final co-write, “I Can’t Wait to Stay,” is nothing more than a song about remaining in the town where your family has generational roots.

It feels as if a prerequisite of any modern day country album is having a song co-written by Shane McAnally. His contribution, a co-write with Eric Paslay and Dylan Altman is “Country Side of Heaven,” which is actually a great song. The overall track would’ve been better served with an acoustic arrangement, which would’ve brought fourth the interesting lyric a lot more.

“All Cried Out” is a bombastic power ballad ruined by atrocious wall-of-sound production that causes Morgan to over sing. “Nowhere Without You,” co-written by Michal McDonald and John Goodwin, is much better although I found the piano based production rather bland. Will Hoge and Gordie Sampson teamed with Altman on “Who Would It Be,” a name-check song about the legends you would spend time with if you could.

The final cut, “Hearts I Leave Behind,” features Christian Rock singer Mac Powell. The song was originally recorded by Pete Scobell Band Featuring Wynonna Judd, which I reviewed last year. It’s far and away the crowning achievement of A Whole Lot More To Me and a perfect song for Morgan.

The marketing materials for A Whole Lot More To Me describe the album as ‘sexy,’ which I most certainly would not. There is hardly anything here in that vein, unlike Dierks Bentley’s Black, which makes it an odd descriptor. Morgan does sing at full power, which showcases his range but unintentionally sound like Blake Shelton circa 2008. The album is bombastic and unremarkable on the whole, but I give Morgan credit for giving into mainstream pressures without selling his soul. A Whole Lot More To Me is nowhere near the upper echelon of albums for 2016, but it is far from the scrap heap. He could’ve done better, but it’s clear he is giving his all.

A Texan in his early 30s, JT Hodges has been trying to break through on Show Dog Universal Records for a year or two with a couple of singles skirting the top 40 cutoff line. Now his debut album gives us a better idea of him as an artist.

The answer is a decidedly contemporary country-rock one with roots more obviously on the rock side than the country one (notwithstanding a mother who once had ambitions of her own to be a country star, and apparently had the first cut on Highway 101’s big hit ‘The Bed You Made For Me’ before rejecting a major label deal to concentrate on family). However, this is definitely an artist with something to say. The singer-songwriter co-wrote most of the material here, generally with his producers, the experienced Don Cook and Mark Wright and minor 90s star Mark Collie, whose own rocking style is not far removed from what Hodges is doing. The sometimes growly voice is nothing special and would be hard to pick out from a number of his contemporaries, but he attacks the songs with energy and commitment and puts them across convincingly. Production is punchy but not so loud as to overwhelm the actual songs as is so often the case with today’s artists.

His debut single ‘Hunt You Down’, written by Hodges with Collie and Rivers Rutherford, just squeezed into the top 40 last year. It is a richly detailed but rather implausible story song about a fling with a rich girl which the protagonist wants to extend, with inventive production, nonchalant whistling and sometimes annoying backing vocals. The follow-up, ‘Goodbyes Made You Mine’, did slightly less well. Almost spoken in the verses, it doesn’t have much of a melody in the verses and gets a bit yelly at times, but a catchy chorus hook and decent lyric with a man presenting himself as a woman’s last and true love give it some interest. These two singles so far rather underwhelmed me, but they are probably the poorest tracks on the album.

I like opener ‘I’d Rather Be Wrong Than Lonely’, a punchy country rock number about a potential hookup with a girl who might be “a little bit dangerous” for him. Hodges wrote the song with Collie and Cook, and together they provide a competently constructed song with a relentless beat, which is one of the best tracks.

This trio also wrote ‘When I Stop Crying’, a very good pained guilt-ridden ballad about redemption and recovery which allows Hodges to venture into the upper reaches of his vocal range. Vince Gill’s backing vocals on this track are proudly vaunted in the liner notes, but are not particularly prominent; Gill also plays a wailing electric guitar solo.

Joined by Mark Wright, they wrote the mid-tempo ‘Leaving Me Later, which is pretty good. Like a calmer sequel to ‘I’d Rather Be Wrong Than Lonely’, it deals with a relationship with a woman not planning to stay around. “Loving me now” is good enough for the protagonist, even if it he knows she is lying and will hurt him when she goes. ‘Give It One More Night’, written with all three producers, is not bad, but too repetitive.

‘Green Eyes, Red Sunglasses’ is a collaboration of Hodges, Collie and Chris Stapleton, and is typical of the latter’s blues-edged material. Cook and Hodges wrote ‘Right About Now’ with Lynn Hutton, a ballad brooding about a two-timing woman’s infidelity with a nice little double meaning in the lyrics.

There are a couple of outside cuts. ‘Sleepy Little Town’ is a compelling if dark semi-story song written by Chris Stapleton and Lee Thomas Miller. It is about the secrets and crimes coming to light in a small town, ranging from an FBI takedown of the local high school coach to a preacher’s wife who finally cracks and fights her husband’s domestic violence. It’s been selected as the latest single, and seems made for a video treatment to help flesh out the stories a bit. ‘Rhythm Of The Radio’ was written by Eric Paslay (another up-and-coming artist) and Dylan Altman, and is a pleasant but slight love song with attractive instrumentation; the Irish flute in particular gives it a fresh summery feel – a single for summer 2013 perhaps?

Overall, J T Hodges comes across as a kind of amalgam of Eric Church, Eric Heatherly and Mark Collie. He has had limited success so far, even with the support of label Show Dog Universal, but it sounds commercial enough while possessing real substance and ambition. He’s a long way from traditional, but definitely one of the better contemporary artists, and this is a very promising start.