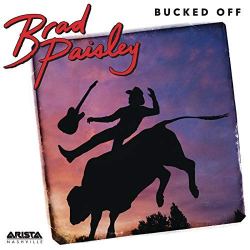 Prior to the 52nd annual CMA Awards telecast last week, it was heavily buzzed about that co-host Brad Paisley was going to sing a new song, his first from a new album, of which he’s only recorded 3-5 songs so far. One review I read even heralded the song as a return to his traditional country roots, and let’s face it, Paisley has become so irrelevant in recent years, it’s about the only move he could make that would actually make sense.

“Bucked Off” starts out innocently enough. Paisley is on a bar stool having a conversation with his woman, who is clearly ending their relationship. He likens himself to a cowboy on a bull, about to be thrown off. So you don’t mistake his situation, he sets the mood:

And George Strait’s on the jukebox in the corner

Singing about cowboys riding away

Name-checking Strait and his #5 hit from 1985 is totally appropriate in this instance. Then he goes on, laying the rodeo/cowboy imagery on thick:

You can go to Houston, Vegas or San Antone

And watch a bull rider hit the dirt

Or head down to this bar for a little cover charge

You can watch me get thrown by her

George Strait’s on the jukebox again

Says if I leave now I can still make Cheyenne

By the time Strait came around for a second time, I knew exactly what was going on. “Bucked Off” isn’t just another song in Paisley’s catalog. It’s a dedicated tribute to Strait. This jukebox reference, which in any other song would’ve gone to a different country singer, is forced and cutesy. Paisley doubles down on the bridge:

I think about those nights in Marina Del Rey

As this beautiful cowgirl slips away

But pain only lasts so long

And when you get bucked off you get back on

Going into his CMA performance, I was expecting what I thought to be true — Paisley was releasing a honky-tonk song to country radio, in pure form, not the faux honky-tonk Garth Brooks tried to pull over our eyes with “All Day Long.” Sadly, this isn’t the case.

But I will give Paisley credit where it’s due. “Bucked Off” is the most traditional country song released to radio since the leaves turned colors and began to fall from the trees. There is a full dose of steel and fiddle very audible in the mix. It has good bones, a catchy melody, and a somewhat engaging story. Paisley also deserves a tremendous amount of praise for not selling out like Keith Urban and using “Bucked Off” as a desperate attempt at relevancy.

He just takes the Strait thing too far (even the lettering and font of his name on the cover art is a nod back to when Strait portrayed Dusty Chandler in Pure Country). The right way to honor a country legend isn’t to sample that artists’ classic melodies throughout, nor is it right to drown those melodies and traditional instruments in a haze of guitars, no matter how well they’re played. He made similar mistakes on the trepid “Old Alabama.”

My issue here is that Paisley knows better. He proved that seventeen years ago when he took “Wrapped Around” to #2, as the second single from Part II. It showed how Strait influenced him, while correctly moving the genre forward into the new Millennium. It’s a pipe dream to think he would go back there, but I can always hold out hope, no matter how thin a sliver it might be at this point.