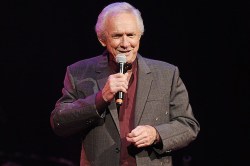 For one who grew up on the country music of the period (1960-1975) the last few years have been tough as we have seen many legendary figures come to the end of the road. 2017 was no exception. Let’s take a look back with a few words about the various stars that were dimmed in 2017. I should note that I’ve included a few non-country personal favorites.

Chuck Berry, 90, was a pioneer of rock ‘n roll and while many would not regard him as country, Buck Owens thought that Berry wrote great country songs, and the bluegrass duo of Jim & Jesse McReynolds recorded an entire album of his songs (Chuck wrote the liner notes) so who am I to disagree with them?

Sonny Burgess, 88, rockabilly pioneer and early Sun Records artist. There is a younger country artist with the name Sonny Burgess, whom I don’t believe is related. This guy was a great on-stage performer.

Glen Campbell, 81, singer and guitarist who first came to my attention as a session musician for Frank Sinatra and the Beach Boys (with whom he sometimes toured). Glen, who died after a long bout with Alzheimer’s, could play anything with strings and could sing anything. My favorite tracks by him include “Galveston”, “Wichita Lineman”, “Wherefore and Why” and “I’m Gonna Love You”. Glen hosted a television show, appeared in movies and was simply one of the giants of the industry.

Antoine “Fats” Domino, 89, wasn’t a country singer but his music was infectious fun and enjoyed across the board. His hits were too numerous to list and many of them were covered by country singers.

Dave Evans, 65, had one of the best voices in bluegrass music being a great tenor singer, as well as being a good banjo player. It would be difficult to find another singer who sang with as much heart as Dave Evans.

Michael Johnson, 72, singer and guitarist whose country hits included “Give Me Wings” and “The Moon Is Still Over Her Shoulder”. Michael was a terrific acoustic guitar player and had a major pop/adult contemporary hit with “Bluer Than Blue”.

Miggie Lewis, 91 was a part of the first family of bluegrass gospel, the Lewis Family. The group disbanded years ago but youngest brother “Little” Roy Lewis a dynamic banjo player, comic and personality who still plays the bluegrass festival circuit.

Sam Lovullo, 88, was the producer and casting director of the long-running Hee Haw TV series (1969-1992). If he was only remembered for Hee Haw that would be sufficient legacy, but his son Torey Lovullo played major league baseball for eight years and then became a major league manager (he was the National League Manager of The Year for 2017). I am not ashamed to admit that I watched Hee Haw every chance I had, and that I know dozens of verses to “Pffffft, You Were Gone”.

Geoff Mack, 94, composer of the tongue-twisting and widely recorded “I’ve Been Everywhere,” in his native Australia. The lyrics familiar to American listeners were not the original lyrics, but a rewritten version to reflect North American place names.

Jo Walker Meador, 93, as executive director built the Country Music Association from a tiny, ragged startup into one of the nation’s most visible and successful trade organizations. Jo is a member of the Country Music Hall of Fame, and I can make a pretty good case for her being one of the two or three most important women in the history of country music.

D.L. Menard, 85, singer and songwriter widely known as the “Cajun Hank Williams” and most celebrated for his 1962 recording of “La Porte en Arriere,”. He died in his native Louisiana.

Tom Paley died in England at the age of 89. Tom was a founding member (along with Mike Seeger and John Cohen) of the New Lost City Ramblers, a group that did much to further the acceptance of bluegrass among folk audiences. I saw them once in 1962 and they were terrific.

Leon Rhodes, 85, was the lead guitarist for Ernest Tubb’s Texas Troubadours and later played in the Grand Ole Opry and Hee Haw staff bands. He was also a successful session musician.

Curley Seckler who died in late December at the age of 98, was one of the last links to the first generation of bluegrass musicians, having performed with Bill Monroe and Flatt & Scruggs. Curley was old enough to remember Jimmie Rodgers and the Original Carter family being played on the radio. He also appeared on several segments of the Marty Stuart Show on RFD.

There was nothing country about Keely Smith, 89, but she was a fine singer with a terrific comedic touch. Her act with ex-husband Louis Prima played to packed houses in Las Vegas for the better part of a decade.

Tammy Sullivan died at the much too young age of 52, of cancer. Tammy was a marvelous singer best known for her work with the Sullivan Family, a bluegrass gospel band.

Wendy Thatcher, 69, was a formidable singer who is best remembered for her years with Eddie Adcock’s various bands.

Mel Tillis, 85, songwriter, singer, actor, comedian and member of the Country Music Hall of Fame, died in Ocala, Florida. Mel first came to prominence as a songwriter, with early efforts becoming hits for the likes of Webb Pierce and Ray Price during the early 1960s. It would be a decade before his career as a performer went into overdrive, but when it did he racked up many hits and won the CMA Entertainer of the Year Award. I liked many of his songs but my favorite is “Would You Want The World To End (Not Loving Me)”. I saw Mel live on several occasions.

Don Warden, 87, was a former steel guitar player in Porter Wagoner’s band and subsequently Dolly Parton’s manager. You can sometimes catch Don in RFD’s reruns of the Porter Wagoner Show.

Don Williams, 78, was a singer and songwriter who regularly topped the country charts during the 1970s and ’80s. Starting out with the folk-country Pozo Seco Singers, Don’s solo career made him an international star and landed him in the Country Music Hall of Fame.

Bob Wooton, 75, Johnny Cash’s lead guitar player from 1968 until Cash’s retirement in 1997, died in Gallatin, Tennessee. Bob was the replacement for Luther Perkins.