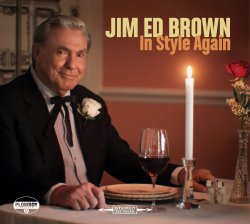 I can’t tell you when Jim Ed Brown last issued a solo album of new material. The last one I recall was It’s That Time Of The Night on RCA in 1974, After that there were some duet albums with Helen Cornelius, but even the last of those albums came in 1980. There may have been something after that but I don’t recall anything.

Anyway, it truly is a pleasure to have some new material from Jim Ed. The voice isn’t quite as smooth as it was in 1954 or 1974, but it is still a good voice with warmth, depth and character.

While not specifically designated as a ‘concept album’ , the general theme of the album is that of an older person looking back at life.

The album opens up with “When The Sun Says Hello To The Mountain” a wistful older song I’ve heard before. Famous French-Canadian singer Lucille Starr had a huge hit with this record singing the original French lyrics. Marion Worth had a country hit with it in 1964, and Mona McCall (Darrell Mc Call’s wife) does a fine version of the song (using mixed French and English lyrics under the title “The French Song”), but Jim Ed nails the song and makes it his own. It’s a lovely ballad with a beautiful melody. Jim Ed is joined by his sister Bonnie Brown and the song sounds like a song the Browns could have recorded in their heyday. Chris Scruggs plays Hawaiian-style steel guitar on the track.

I hear at my door
The love song in the wind
It brings back sweet memories of you.
I’m alone dreaming only of you.

“Tried and True” was written by the album’s producer Don Cusic, one of six songs Cusic wrote for this album. The song is a mid-tempo ballad, a love song about the kind of love the singer bears for his true love.

“In Style Again” was produced by Bobby Bare and issued as a single a year or two again. It wasn’t really part of this album project, (there is no overlap among the musicians used on this track and the rest of the album tracks) but it was added to the album and fits in nicely with the general theme of the album. It should have been a hit, but of course, radio won’t play songs by octogenarians, no matter how high the quality.

Don Cusic penned “Watching The World Walking By” a mid-tempo ballad of the life as seen through older eyes.

“You Again” was a #1 hit for The Forester Sisters in 1987. Jim Ed is joined by Cheryl & Sharon White on this slow ballad, another retrospective love song. Paul Overstreet and Don Schlitz wrote this song.

Looking at my life
Through the eyes of a young man growing older all the time,
Maybe just a little wiser
I can clearly see
All my mistakes keep coming back to visit me
Pointing out the roads not taken
So much I’d like to change but one thing I’d do the same

Jim Ed digs into the song bag of Hall of Famer Cindy Walker for “I Like It”. It’s another mid-tempo ballad as is the next track, probably the most famous song on the album, “Don’t Let Me Cross Over”, a song which spent eleven weeks at #1 in 1962 for Carl & Pearl Butler. Jim Ed is joined here by his former duet partner Helen Cornelius. They still sound great together although Jim Ed and Helen don’t sing with the exuberance of the original. This song does not quite fit the general theme of the album since it’s an old-fashioned (almost) cheating song.

“Older Guy” is another song from the pen of Don Cusic, this one another mid-tempo ballad comparing the energy of younger guys to the wisdom of older men. This song straddles the line between jazz and country. “It’s A Good Life”, also written by Don Cusic continues the narrative of the album, which is the view of life through the eyes of an older man.

Bill Anderson chips in with “Lucky Enough” , probably the most up-tempo song on the album. In this song the singer recounts the thing in life that really represents good luck. If you’re lucky enough to be in love, you’ve already won – you’re lucky enough! Sometimes we forget that.

“Laura (Do You Love Me?” is yet another slow ballad from Cusic, this one the tale of a person left Ireland long ago separating himself from his one true love , thinking of her often and wondering if she still thinks of him.
“The Last One” is another slow ballad, this one ruminating about the emotions of end of life situations. It’s rather a sad song and one that could never sound sincere in the hands of a younger artist.

“Am I Still Country” is another Don Cusic song, a wry tongue-in cheek ballad that pokes fun of bro-country and poses the essential question ‘Am I Still Country Or I Have I Gone Too Far?’ I love the song and think that in different circumstances the song could have been a hit.

I like to go to parties and have a good time
But I’m usually home and in bed by nine
Me and my lady find sweet romance
With champagne, Sinatra and a real slow dance
I like a martini with real cigar
Am I still country or have I gone too far

The producer of this album, Don Cusic, has had an interesting and distinguished career covering most aspects of country music. His story can be found at www.doncusic.com.

Although it is early in the year, this may be the best album of 2015. Certainly it will be in the running – a solid A +