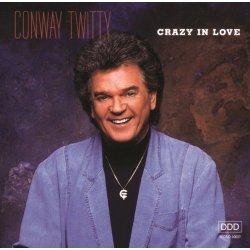 One of the reasons for Conway Twitty’s longevity as an artist was his knack for adapting to new musical trends. In the 1980s, as country music entered the Urban Cowboy era and adopted a slicker, more pop-oriented sound, Conway did likewise, and maintained his position at the top of the charts. His new sound was particularly evident on the Warner/Elektra recordings. Interestingly, though, he did not follow country music’s trend back toward a more traditional sound in the latter half of the decade. For whatever reason, it seemed to work. His albums from this era only sold modestly but he continued to have radio hits, although somewhat less consistently, and remained relevant to the genre.

Crazy In Love was Conway’s first full-length album of the 1990s. He produced it with his wife Dee Henry and MCA label chief Jimmy Bowen. Like his other recent efforts, there is nary a fiddle nor a steel guitar to be found, although the album itself encompasses a variety of styles from pop and R&B to more traditional country fare. The title track and lead single was perhaps his most pop-leaning single ever. It had originally been included on a Joe Cocker album in 1984 and Kim Carnes took it to #13 on the AC charts in 1988. Kenny Rogers had a competing version from his 1990 Love Is Strange album, which reached #9 on the AC charts. Conway’s version reached #2 on the country charts, a position where many of his singles had landed since he’d rejoined MCA in 1987. Written by Randy McCormick and Even Stevens, there is nothing even remotely country about this song, but it is very good nonetheless. The upbeat “I Couldn’t See You Leavin'”, written by Rory Michael Bourke and Ronny Scaife reached #3, making it the last bonafide hit single of Conway’s career. None of his subsequent efforts would chart in the Top 20. There was one last single released from Crazy In Love, though — the traditional-leaning “One Bridge I Didn’t Burn”, which peaked at a disappointing #57, despite being the best song on the album. It is, however, a track that is crying out for the fiddle-and-steel treatment. The album cut “What’s Another Goodbye”, written by Kent Robbins is another very good track that would have benefited from more traditional instrumentation.

I wasn’t as enamored by Conway’s cover of the 1978 Dr. Hook hit “When You’re In Love With a Beautiful Woman” (another Even Stevens composition) or the slightly overblown power ballad “Just the Thought of Losing You”, written by Michael Bolton and Jonathan Cain. Both are well executed but with so many good country songs available in Nashville at the time (unlike today), one wonders why these two were chosen. The upbeat closing track “Hearts Breakin’ All Over Town” is not bad but is only truly noteworthy because of its co-writer Pam Tillis who was about to enjoy her own commercial breakthrough.

Conway Twitty’s long career saw him embracing a number of different musical styles and as such it is inevitable that everything he did will be to everyone’s taste. While I wouldn’t rate Crazy In Love as highly as his early 70s albums, it is a solid effort for its era. I don’t think I’ve ever truly hated anything Conway Twitty did — aside from his unfortunate treatment of “Danny Boy” during his rock-and-roll days. Crazy In Love is not essential listening, but it is a worthwhile late career effort from a true legend, who truly was the best friend a song ever had.

Album Review: Tanya Tucker – ‘What Do I Do With Me’ 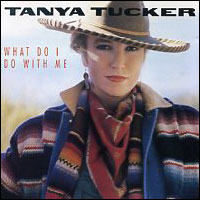 Had she chosen to retire from the music business around 1990, Tanya Tucker could have done so knowing that she’d secured her musical legacy. By then she had been a presence on the country charts for nearly two decades, had released 20 studio albums, and secured 30 top 10 hits, including ten #1’s. She was also the “last woman standing”, the only artist who had been having top 10 hits in the early 70s to still be regularly reaching the top of the charts. No one was surprised that her winning streak still continued, but few realized at the time that Tucker had not yet reached her commercial or artistic peak.

Released in July 1991, What Do I Do With Me is the jewel in Tucker’s musical crown. It follows the same formula as its predecessor, Tennessee Woman , combining radio-friendly, pop-infused uptempo songs with tender, heartfelt ballads. However, this time around the song selection was stronger and that is what makes What Do I Do With Me Tanya Tucker’s masterpiece.

For the lead single, Tucker again turned to her old friend Paul Davis, who wrote the sassy, harmonica-driven “Down To My Last Teardrop”, in which the long-suffering protagonist tells her unfaithful partner that he’s drained her of every last drop of emotion. Tucker took this tune all the the way to #2 in the early summer of 1991.

The next single was the title track. Beautifully written by Royce Porter, L. David Lewis, and David Chamberlain, it tells the story of a woman wondering aloud how she will occupy the free time she suddenly has in the aftermath of a break-up. This is the type of ballad at which Tucker excels. Every line is filled with emotion, yet her performance is restrained and never over-the-top. Like its predecessor, “(Without You) What Do I Do With Me”, just missed the top spot on Billboard’s country singles chart, peaking at #2. This is the kind of song that has been missing in action from country radio in recent years, having fallen from favor in lieu of happier, empowerment anthems.

“Some Kind Of Trouble”, a more blues-infused number, didn’t chart quite as high, peaking at #3. Written by Mike Reid, Brent Maher and Don Potter, this song is more beat-driven than the previous singles, but the lyrics are still quite strong. I suspect that it was probably written with The Judds in mind, given the Maher and Potter connection, and would have likely been recorded by that duo had they still been active.

The fourth and final single, “If Your Heart Ain’t Busy Tonight” is a more light-hearted number written by Tom Shapiro and Chris Waters, that peaked at #4.