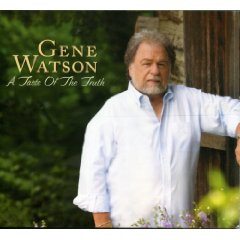 Gene Watson is one of my all-time favorite singers, and it is good to report that he is still sounding great at the age of 65. Listening to his new album, his second for independent label Shanachie, is like listening to a masterclass in singing country music, a subtle rendering of understated emotion. Gene is not a songwriter, so the ultimate artistic success of his records always depend on finding great outside material, and fortunately he has found some fine songs here from some of the best writers currently in Nashville, which are ideally suited to his voice. The overall theme is one of lost love and regret.

It opens with ‘Speakin’ Of The Angel’, a great traditional sounding mid-tempo number written by Shawn Camp and Jim Rushing, which is a joy to listen to even though the protagonist is heartbroken dwelling on his beloved ex planning to marry another:

“If I swear that I don’t love her, God knows it’s a lie,
Speakin’ of the angel is enough to make me cry.”

The title track comes from the pen of Rebecca Lynn Howard, and is a fine ballad with a beautifully realized metaphor, delicately delivered in Gene’s best style, as he addresses another ex, this time one he now regrets having left, finding the freedo he had hungered for has a “lonely flavor”:

Another gorgeous sad ballad perfect for Gene’s voice is ‘Til A Better Memory Come Along’, previously recorded by both Mark Chesnutt and Shelby Lynne. I like both previous versions, but this is quite lovely as Gene can’t get over the woman who has left and tells her memory so with perhaps the best vocal performance on the album:

“How long will it take before I leave you
In the past where you belong?
One day I might forget
But right now I’m not that strong
So I’ll hold on
Til a better memory comes along”

Just as good is another sad song about failing to get over someone (and obviously not trying very hard), Tim Mensy and Keith Stegall’s ‘Three Minutes At A Time’, as the narrator forgets his troubles for a while by listening to country songs on the jukebox: “it’s heartache in rhyme, but it helps me hang on”, he testifies.