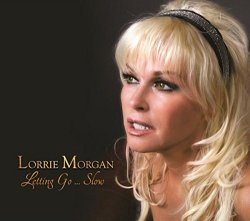 I’ve been a fan of Lorrie Morgan ever since I first saw her video of “Trainwreck of Emotion” on TNN back in 1988. I’ve followed her career ever since, though admittedly not quite as closely since her days as a major label artist ended about 15 years ago. I’ve always felt that the true artists are the ones who continue to make music after they’ve peaked commercially. Morgan certainly falls into that category; she released three solo albums and one collaboration with Pam Tillis in the years since her tenure with BNA Records ended. But post- commercial peak projects are often a mixed bag, particularly for artists who don’t write a lot of their own material. Finding good songs is frequently a challenge – and then there is the added problem of declining vocal power, which often plagues aging artists.

Fortunately, Morgan has overcome both of those obstacles on her latest collection Letting Go … Slow, which was released by Shanachie Entertainment last week. In an interview with Country Universe she said that she spent a considerable amount of time working to get her voice back in shape. The effort has paid off in spades; she sounds better on Letting Go … Slow than she has in years. And although she relies heavily on cover material to compile an album’s worth of songs, she’s managed to dig a little deeper and come up with some gems that are deserving of another listen but have been largely overlooked by the plethora of artists releasing covers albums in recent years. END_OF_DOCUMENT_TOKEN_TO_BE_REPLACED