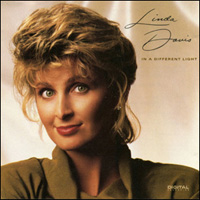 Released on Capitol-Nashville in February 1991, In A Different Light was Linda’s first major label album. Released nearly a decade after her moderately successful duets with Skip Eaton as “Skip & Linda”, this album was Linda’s first opportunity to shine as a solo act.

As it happened, the album itself failed to chart and none of the three singles released from the album make much of an impact on the country charts.

By my lights, this is not at all a country album. I think it should have been marketed to the easy listening/middle of the road. Don’t get me wrong, Linda Davis is a fine singer but the singles from this album received virtually no airplay on county stations around Central Florida.

The album opens with “In A Different Light,” an overwrought ballad from the pens of Ed Hill and Jonathan Yudkin. This song was released as the first single and died at #61.

Next up is “Some Kind of Woman” by Annette Cotter and David Leonard. This song was released as the second single from the album, and died only reached #68. I think this gritty up-tempo ballad was the best track on the album – similar to something Brooks & Dunn might have released, but I suspect that country radio was so disgusted with the previous single, that they simply did not give this song a chance

Well, I guess you’re showing me a thing or two

Loving with a vengeance every night with someone new

And I got this funny feeling, it’s for my benefit

So I’m gonna take it as a kind of compliment

Oh, I must be some kinda woman

Look how many women you seem to need

To take the place of one good one

And give you what you had when you had me

Oh, I sure must be some kinda woman

Since you need a different girl each night

There must not be a one of them, knows how to do you right

So add them little numbers, try and equal me

Meanwhile I’ll just take it as a form of flattery

Next up is “Three Way Tie” (written by Mary Beth Anderson, Lisa Silver, and Carol Grace Anderson) was the third single released. Another overwrought ballad, this song failed to chart, and frankly, it sounds like something any cocktail lounge singer might tackle.

None of the remaining tracks were released as singles:

“From Him to Here” (Mark D. Sanders, Verlon Thompson) is a pretty good mid-tempo song, that actually sounds like a country song. I think this would have made a decent single

“If Your Greener Grass Turns Blue” (Cindy Greene, Marsha Spears) has a bit of that country cocktail lounge feel to the mid-tempo instrumentation but it is a decent song, that Linda sings well. This would have made a decent single.I had never even been outside the county line

Unless you count the million times I left inside my mind

In my day dreams, I could see

The way the luck would shine on me

When I finally found the wings to fly

As my mama helped me pack my suitcase

If your sunny sky turns gray

To see just what you’re running from

Here at home there’ll always be place for you

If your greener grass turns blue

“There’s a Problem at the Office” (Annette Cotter, Kim Tribble) is a bland ballad …

He calls to tell me he’ll be late again

There’s a problem at the office

So don’t wait up for him

And I guess I shouldn’t worry but I do

Cause a woman senses changes

Her man is going through

And bought some shirts in colors

And when we touch that old time feeling’s gone

There’s a problem at the office

And it’s hitting close to home

… whereas “Knowin’ We’ll Never Know” (Jim Rushing, James Dean Hicks) is a nice ballad of what might have been

“White Collar Man” (Vernon Rust) is a slow semi-acoustic ballad, nicely sung about a husband who places all of his priorities on work and none on family.

“The Crash of 29” (Ron Moore, Billy Henderson) has a very folksy sound to it. The crash of 29 has nothing to do with the great Wall Street Crash of 1929, but rather the self-realization that time is marching on and she is getting bored. This a pretty good album track

“If I Could Only Be Like You” (Kendall Franceschi, Quentin Powers, Reba McEntire) is a slow piano ballad, nicely sung, but ultimately not very interesting.

Linda’s vocals on this album are very reminiscent of Reba McEntire, only not quite as powerful as Reba’s vocals – sort of a Reba-lite. I know Linda Davis can actually sing country music and do it well as I have heard her do it. I don’t dislike this album, but I am not very charged up about it. I regard two of the three singles released as mistakes, with several of the album tracks being more single-worthy.

This album has keyboards, synthesizers and, cello, but no fiddle, steel guitar, mandolin, banjo or anything else to lead you to think of this as a country album.