Leave a comment Posted by Occasional Hope on December 7, 2016

We were recently reminded that Kevin Moon (whose Throwback album was one of my favourites of last year) had released new music. One of my minor gripes with that album was that it consisted of rather well worn material, and here he tackles new or lesser known songs. It turns out to be halfway between an EP and a full length album, with eight tracks, and as far as I can see is only available digitally.

The best song is the opening ‘Good Whiskey’, a great song in which the protagonist first rejects alcohol as a cure for his heartbreak:

‘What If She Don’t’ is a nice love song with the protagonist unsure whether the object of his affections understands the depths of his love. He then explains it to her in the attractive ‘Girl That’s How’. ‘Cowgirl’s Gonna Dream’ is a sweet song about an ordinary Tennessee country boys who manages to land a Texan cowgirl as his wife.

‘Scarecrow’ is an anthroporphic description of the farmer’s friend, and has a certain charm. The relaxed ‘Blue Agave Shore’ dreams of a Mexican vacation but settles for a back porch.

There are a couple of covers, both from the 1970s. Eric Clapton’s romantic ‘Wonderful Tonight’ works surprisingly well as a country song, and has been done by country artists before – David Kersh (now largely forgotten) had a top 20 hit with it in the late 90s. Kevin’s version is tender and convincing, and really very good.

‘Daddy What If’, written by Shel Silverstein, was a hit for Bobby Bare and his 5 year old son. Kevin recruits his three year old, Weston, to sing the child’s part on this rather twee tune. The little boy has a vague approach to pitch, but the overall effect is rather sweet.

Moon has an attractive voice, and while this album has a more modern sound than Throwback, it is still solidly country. A couple of extra songs would have been welcome, but it’s still a worthwhile release. 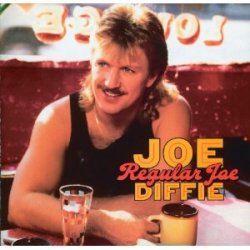 Joe Diffie’s sophomore release continued to build upon the winning formula of 1990’s A Thousand Winding Roads and went on to become his first gold album in 1992. While listening to it for the first time in quite a while, caused me to experience a severe case of 90s nostalgia. The first notes of the opening track, “Startin’ Over Blues”, a single that peaked just outside the Top 40 caused me to stop what I was doing and listen in amazement at the excellent and non-pretentious picking and singing, something that I routinely took for granted in the 90s but sorely miss from most contemporary releases. Like its predecessor, Regular Joe was produced by Bob Montgomery and Johnny Slate. Diffie had a hand in writing four of the album’s ten songs.

In addition to the aforementioned “Startin’ Over Blues”, Regular Joe spawned three other singles, including two top five hits — “Is It Cold In Here” and “Ships That Don’t Come In” — which I consider to be the two finest performances of Diffie’s career. The former examines a dying relationship, while the latter is a conversation between two men in a bar — a younger one who is discontented with his life, and an older, wiser one who points out that there are plenty of others who are far worse off. It’s not exactly the type of song that would find a home on country radio today, but it’s the kind that the format so desperately needs. It’s difficult to decide which song I like better, though if forced to choose, I’d give a slight edge to “Is It Cold In Here”. Diffie shares songwriting credits on both of these masterpieces. Either one could have and should have been considered his career record; it’s a shame that he is better remembered today for his uptempo semi-novelty tunes. Following these two consecutive top five successes, Joe faltered a bit on his next single, the upbeat “Next Thing Smokin'” — another of his co-writes, which only made it to #16 on the charts. “Startin’ Over Blues” fared even worse, stalling at #41, despite being one of the more radio-friendly tracks on the album. Possibly it didn’t receive enough promotional support from the label. In the early 90s, artists tended to release albums more frequently than they do today. The lead single from Diffie’s next project was released slightly more than a year after Regular Joe, which may have been to the detriment of “Startin’ Over Blues”, his worst performance on the singles charts up to that time.

In addition the album contains several solid tracks that were not chosen for single release. Diffie turns in a fine vocal performance, reminiscent of George Jones on “Ain’t That Bad Enough”, which he wrote with Ron Moore and longtime collaborator Lonnie Wilson. The closing track “Goodnight Sweetheart” could have been subtitled “The One That Got Away”; it went on to become a Top 10 hit for the now-forgotten David Kersh in 1996. It’s surprising that Epic didn’t send this one to radio, particularly in light of the chart success of the album’s other ballads.

Despite all of these fine performances, Regular Joe is not without its flaws. It is marred by two tracks in particular — “Just A Regular Joe” and “Back To Back Heartaches” which both suffer from a now dated-sounding line-dance style beat and production which make them sound out-of-place with the rest of the album. However, both of these missteps are forgivable, detracting only slightly from the enjoyment experienced from listening to this fine album.

Regular Joe is still in print and available from vendors such as Amazon and iTunes.

Album Review: Reba McEntire – ‘If You See Him’

Reba McEntire and Brooks & Dunn spent 1997 on tour together as co-headliners.  One night Reba would open for Brooks & Dunn and the next night they’d switch.  At the end of that tour, Reba and Ronnie Dunn would perform ‘You Don’t Know Me’ as a duet before being joined onstage by Kix Brooks for a song I think was called ‘Cotton Fields’.  But Reba and Ronnie’s take on the Cindy Walker classic was really the highlight of the evening. Between them, they possess two of the finest voices in modern country music.  But that 1997 tour was supposed to be a one time deal, and besides, Ronnie Dunn already had a duet partner at the time.

In early 1998, both acts were working on new albums.  Reba and Kix Brooks both heard a song called ‘If You See Him’ (which I guess would become ‘If You See Her’ for the duo) and put it on hold, unbeknownst to each other.  When they found out what happened, they decided to do the song a duet between the two acts, becoming a sort of trio at the end.  Recording that duet set the wheels in motion for another national tour pairing between the redhead and the pair of cowpokes, plus it set the stage for a really innovative cross-label promotion of the albums that would contain the song, now titled ‘If You See Him, If You See Her’.

On June 2, Reba’s album If You See Him and Brooks and Dunn’s own If You See Her would be released.  Meanwhile, Reba and Brooks & Dunn hit the road, taking Terri Clark and David Kersh along this year.  The single shot to the top of the country singles chart and stayed there for 2 weeks.  If You See Him quickly went gold and then platinum. Three other singles hit the top 10, and the disc itself debuted at #2 on the albums chart – while the Hope Floats soundtrack had a solid lock on the top spot. For those interested, Brooks & Dunn’s If You See Her bowed at the #4 position the same week.

‘If You See Him, If You See Her’, with its adult contemporary fare is much more akin to the songs on Reba’s album and in her catalog than Brooks & Dunn’s.  The story of two former lovers confiding in a mutual friend about how they still love each other is well-written, and the addition of Kix Brooks at the end on harmony makes for a very pleasant and interesting listen.  Meanwhile, Reba and Ronnie Dunn turn in killer vocal performances, though it’s obvious they recorded the song in Ronnie Dunn’s key rather than Reba’s as her acrobatics sound like they were more of a chore than usual.