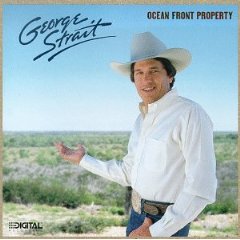 Strait was on a serious hot streak in 1987 when he released Ocean Front Property, his seventh studio album, co-produced with Jimmy Bowen again. Each of the three singles from the album went to #1, starting with the title track, and the album itself was the first album ever to debut at the top of the Billboard Country Album charts. At present, it is the only one of his 80s releases to have achieved double platinum status.

That title track, written by Dean Dillon, Hank Cochran and Royce Porter, has become one of George’s classics, with its ironic lyric telling his ex that he’s over her, and barely concealed subtext that only an idiot could believe that:

“I don’t love you, and now if you’ll buy that
I’ve got some ocean front property in Arizona
From my front porch you can see the sea …
If you buy that, I’ll throw the Golden Gate in free”

Dean Dillon contributed two further songs, the solo composition ‘I’m All Behind You Now’, a resigned post-breakup number which closes the album in sightly downbeat mood, and the sweetly melancholic ‘Without You Here’, where he teamed up again with Royce Porter to produce the tale of a wife who can’t enjoy herself on a Caribbean cruise because her husband isn’t with her:

It’s not altogether clear why they’re not vacationing together, but one assumes business kept him at home.  There is a happy ending, as he misses her too, and ends up flying out to join her. The song’s phrasing is very characteristic of Dillon’s work, and the song has faint but subtle Caribbean tinges to the production which do not stop it from sounding country.

The second single was another all-time Strait classic, the amusing western swing ‘All My Exes Live In Texas’, written by the great Sanger D Shafer. He had written ‘Does Fort Worth Ever Cross Your Mind’ with his third wife Darlene, and he wrote this one with his fourth wife Lyndia. On one level this might be dismissed as little more than a novelty song, as the narrator reels off a list of the exes after his blood resulting in him escaping to Tennessee, but George’s laidback ironic delivery carries the track.

END_OF_DOCUMENT_TOKEN_TO_BE_REPLACED

Album Review: Tanya Tucker – ‘What Do I Do With Me’

Had she chosen to retire from the music business around 1990, Tanya Tucker could have done so knowing that she’d secured her musical legacy. By then she had been a presence on the country charts for nearly two decades, had released 20 studio albums, and secured 30 top 10 hits, including ten #1’s. She was also the “last woman standing”, the only artist who had been having top 10 hits in the early 70s to still be regularly reaching the top of the charts. No one was surprised that her winning streak still continued, but few realized at the time that Tucker had not yet reached her commercial or artistic peak.

Released in July 1991, What Do I Do With Me is the jewel in Tucker’s musical crown. It follows the same formula as its predecessor, Tennessee Woman , combining radio-friendly, pop-infused uptempo songs with tender, heartfelt ballads. However, this time around the song selection was stronger and that is what makes What Do I Do With Me Tanya Tucker’s masterpiece.

For the lead single, Tucker again turned to her old friend Paul Davis, who wrote the sassy, harmonica-driven “Down To My Last Teardrop”, in which the long-suffering protagonist tells her unfaithful partner that he’s drained her of every last drop of emotion. Tucker took this tune all the the way to #2 in the early summer of 1991.

The next single was the title track. Beautifully written by Royce Porter, L. David Lewis, and David Chamberlain, it tells the story of a woman wondering aloud how she will occupy the free time she suddenly has in the aftermath of a break-up. This is the type of ballad at which Tucker excels. Every line is filled with emotion, yet her performance is restrained and never over-the-top. Like its predecessor, “(Without You) What Do I Do With Me”, just missed the top spot on Billboard’s country singles chart, peaking at #2. This is the kind of song that has been missing in action from country radio in recent years, having fallen from favor in lieu of happier, empowerment anthems.

“Some Kind Of Trouble”, a more blues-infused number, didn’t chart quite as high, peaking at #3. Written by Mike Reid, Brent Maher and Don Potter, this song is more beat-driven than the previous singles, but the lyrics are still quite strong. I suspect that it was probably written with The Judds in mind, given the Maher and Potter connection, and would have likely been recorded by that duo had they still been active.

The fourth and final single, “If Your Heart Ain’t Busy Tonight” is a more light-hearted number written by Tom Shapiro and Chris Waters, that peaked at #4.