Leave a comment Posted by Occasional Hope on June 24, 2016 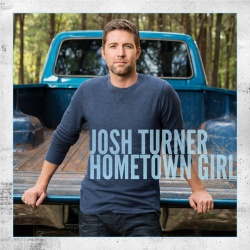 Josh Turner is one of the few surviving traditionally inclined holdouts on a major label, but he has been struggling with radio in recent years, and as a result his label has been delaying releasing new music.

His new single does not boast the deepest of lyrics, but it is a pleasant enough, if rather cliche’d, paean to a woman who has spent time in the big city but returned to the humble small town she grew up in. The protagonist seems to have followed the same trajectory, searching “all over the world” for love, only to find it back home. There is an attractive melody and reasonably restrained though not very inspired modern production, which is. Josh’s voice is as good as ever, and the end result is quite a nice little record. To be perfectly honest in another era it would be regarded as inoffensive but forgettable filler, but set against most of the fare on today’s “country” radio it’s a blessed relief.

The song was written by Marc Beeson and Daniel Tashian.

Following the success of There’s More Where That Came From, Womack released the single “Finding My Way Back Home” in August 2006. A return to the poppier sounds she favored on I Hope You Dance, the song failed to rekindle her radio career and an album of the same name was shelved.

Her next full-length album Call Me Crazy finally saw the light of day in the fall of 2008. Upon release critics hailed the album as one of the year’s best and praised Womack for continuing to explore her roots and show that women don’t have to rely on singing feel-good songs all the time.  END_OF_DOCUMENT_TOKEN_TO_BE_REPLACED