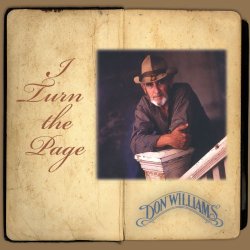 After leaving RCA, Don released a pair of albums on independent label American Harvest Records. He then moved to Giant, a subsidiary of Warner Brothers, and released this album for them in 1998. It was produced by label president Doug Johnson, a longterm fan who had taken the decision to sign the artist after being enthralled by his performance at the Nashville Songwriters Association International Banquet. While the sad reality was that Don was too old at 59 for country radio to be prepared to pay any attention, the album was well received by critics.

There was one, non-charting single, the sweet, upbeat story song ‘Cracker Jack Diamond’, written by Ronny Scaife and Neil Thrasher abut a true love which develops from a meeting at the age of 14. Recorded by, say George Strait, this would have been a surefire hit. At the other end of life, ‘Harry And Joe’ is a sympathetic portrait of two old men who are both widowed just after moving to Florida to retire, and become best friends.

David Hanner’s ‘Pancho’ is about impending mortality, but with characters inspired by the 1950s children’s TV western ‘The Cisco Kid’. Hanner and his partner in the Corbin/Hanner Band, Bob Corbin, wrote ‘How Did You Do It’, addressed to an ex who is coping better with the breakup than the protagonist.

Don revived Tony Arata’s ‘A Handful Of Dust’, which will be familiar to Patty Loveless fans. Don’s version is much lower key and less forceful, with a nice folky feel. The two versions are different enough that they don’t really compete with one another, but it certainly suits Don.

He co-wrote one song with Gary Burr and Doug Johnson, ‘I Sing For Joy’, a touching tribute to Joy, his wife of almost 40 years. A very pretty melody and tasteful string arrangement provide the right setting for the autobiographical lyrics and sincere vocals. The song provides the album title.

On a similar theme, Johnson’s song ‘Her Perfect Memory’ is a sweet and lightly amusing tribute to a wife of many years:

I remember how we struggled
When we first started out
She recalls we had it all
Not what we did without
I think back on those hard times
She remembers only love
Who am I to say that’s not
Exactly how it was?

That’s how she remembers it
She was the lucky one
Just take a look at both of us
And you tell me who won
If she thinks I hung the stars
If that’s what she believes
Then who am I to tamper with
Her perfect memory….

If I made all her dreams come true
As far as she can see
Who am I to tamper with
Her perfect memory?

He also wrote ‘Ride On’, an interesting song about childhood innocence challenged by parental failures:

Some people just lose control,
Some people hit overload
Some people act like some people
They never thought they’d be
So why can’t we all see
The only antidote
The only way to cope
The only true hope is love

Gary Burr and Don Schlitz wrote ‘From Now On’, a thoughtful ballad about baggage and finding love late in life. ‘Take It Easy On Yourself’, written by Bill La Bounty and Steve O’Brien, is my favorite track. A laid back tune combining a love song with advice about not making life too stressful, with a soothing melody and tasteful strings, it is rather lovely.

A cover of Scottish folk-pop-rock duo Gallagher & Lyle’s ‘Elise Elise’ Is okay in its way but not really classic Don Williams. Kevin Welch’s ‘Something ‘Bout You’ is more successful, catchy and charming.

This is definitely a mature album, and a very good one.

Leave a comment Posted by Occasional Hope on March 20, 2017

Jessi’s career slowed down in the late 70s as her radio success fizzled out and she and Waylon had their first (and only) child, Shooter, in 1979. However, in 1981 she recorded a popular album of duets with Waylon (Leather and Lace). This prompted her to return to the studio on her own account, and she resumed her deal with Capitol. Waylon shared production duties with Randy Scruggs.

Although jessi’s duets with Waylon had been hits, it turned out that country rado was now really only interested in jessi as Waylon’s wife. Her solo singles were roundly ignored, with the most successful release from this album, ‘Holdin’ On’, peaking at #70. This is a nice quite upbeat song about splitting up, written by Jessi and Waylon with Basil McDavid.

McDavid is the main co-writer for the album, with another five songs credited to him and Jessi. The charming love song ‘Ain’t Making No Headlines (Here Without You)’ about coping with separation was also covered by Hank Jr, with slightly altered lyrics.

Slightly different versions of the bluesy title track bookend the album. ‘Ridin’ Shotgun (Honkin’)’ features backing vocals and harmonica and ‘Ridin’ Shotgun (Tonkin’)’. ‘Hard Times And Sno-Cone’ is a little quirky; its precise meaning is unclear but with its references to a man who ‘called her a woman but he knew she was a child’, it may possibly have been inspired by Jennifer Harness, Jessi’s teenage daughter by her first marriage to Duane Eddy. She had had a baby at just 15, who Jessi and Waylon helped to raise alongside their own son Shooter, just a year older, and married soon afterwards. The most interesting of the McDavid co-writes is the airy ‘Jennifer (Fly My Little Baby)’, to and about Jennifer. Jennifer and Waylon both guest on vocals, making this a real family affair, with Jennifer singing:

Jessi and Waylon then advise:

Jessi throws in a pair of very current covers: Waylon’s 1981 hit ‘Shine’, and Corbin/Hanner’s spiritual ‘On The Wings Of My Victory’, later recorded by Glen Campbell. She also takes on a much older song, the delicately pretty ‘A Fallen Star’.

‘Somewhere Along The Way’, the only solo Jessi Colter composition on this album, is a subdued ballad about regret for past choices. Co-producer Randy Scruggs contributed ‘Nobody Else But You’, a pretty love song with a lilting melody.

The album is available on a three-album/double CD with Mirriam and That’s The Way A Cowboy Rocks And Rolls.