Album Review: Loretta Lynn – ‘Who Was That Stranger?’ 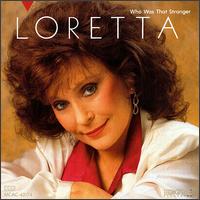 Although the movie had brought Loretta mainstream attention, her musical career was winding down in the 1980s. She had enjoyed only one top 10 hit that decade (‘I Lie’ in 1982), and her last single to reach the top 40 was the #19 ‘Heart Don’t Do This To Me’ in 1985. The neotraditional revival of the late 80s may have brought country sounds back to country radio, but older artists were, by and large, jettisoned along with the pop-country stars of the mid 80s. This album, Loretta’s swan song for MCA, was released in 1988. It was coproduced by Loretta herself with label president Jimmy Bowen and Chip Hardy.

She was not as prolific a songwriter as she had been earlier in her career, writing only two tracks here, the very short (just under two minutes) and bouncy up-tempo ‘Mountain Climber’, a look at working your way up the hard way with a tart sideswipe at those who want to start at the top, and the affectionate portrait of a old-fashioned fire-and-brimstone rural preacher, ‘Elzie Brooks’. It should come as no surprise that he was a real person, the preacher whose services Loretta attended as a child in Butcher Holler; she notes in her book Coal Miner’s Daughter that he never took a penny for his ministry, and in this song compares him to TV preachers with their demands for money. These are both bright and entertaining if less memorable than Loretta’s classics.

The title track and lead single faltered at #57 on Billboard. A brightly delivered tale about rescuing a tired marriage written by Curly Putnam, Max D Barnes and Don Cook, the production sounds a bit dated now and I must confess even after a number of listens I’m slightly unclear whether this is intended to depict a marriage which only comes alive after dark, or a complete fantasy. The follow-up single, the gospelly ‘Fly Away’, penned by Frank Dycus and featuring Bela Fleck’s banjo, did not chart at all, and that marked the end of Loretta’s long association with MCA and its predecessor Decca.