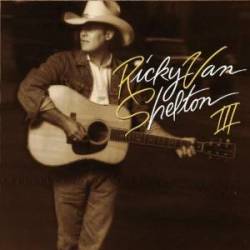 RVS III appeared in January 1990, a little more than a year after Loving Proof. Like its predecessors, it was produced by Steve Buckingham and was a mixture of both new material and some carefully selected covers of older songs that were suddenly back in vogue during the New Traditionalist era. This time around, however, there was slightly less emphasis on rockabilly-style numbers on more on ballads which were proving to be Ricky’s strong point.

Preceding the release of RVS III was a maginificent cover of “Statue of a Fool”, which had been a #1 hit for Jack Greene in 1969. Ricky’s version just missed the top spot, peaking at #2, but it remains one of the standout singles of his career and is his greatest moment of this album. The uptempo “I’ve Cried My Last Tear For You”, written by Tony King (who was engaged to Wynonna Judd at the time) and Chris Waters was the next single. This one did reach #1, but it’s not one of my favorites, which is a not a criticism of the song, but a testament to the strength of the rest of the album. Another great ballad “I Meant Every Word He Said”, in which the protagonist is forced to watch the woman he loves marry another man, also topped out at #2. The album’s fourth and final single was a cover of “Life’s Little Ups and Downs”. The blues-tinged track was an underperforming single for Charlie Rich in 1969. Ricky’s version reached #4, and although it provides a change of pace, it’s my least favorite track on the album.

There are only two rocking numbers on RVS III – “Love Is Burnin'”, which is in the same vein as “Crime of Passion” and a cover of Roy Orbison’s “Oh, Pretty Woman”. The rest of the album was comprised of ballads, most of which could have been hit singles, but Columbia was likely reluctant to release too many ballads in a row to radio. Among these choice tracks are “You Would Do The Same For Me”, a Rory Bourke-Mike Reid composition that I would have preferred to see as a single in lieu of “Life’s Little Ups and Downs”, “I’m Starting Over” written by Kix Brooks with John Wesley Ryles and Mark Sherrill, and a fantastic version of Cindy Walker’s “Not That I Care”. This beautiful waltz had been a minor hit for Jerry Wallace in 1966 (peaking at #44) and had also been recorded by The Wilburn Brothers.

Another standout is album’s closing track “Sweet Memories”, which had been an adult contemporary hit for Andy Williams in 1968 and covered by Willie Nelson in 1979. Ricky is joined by Brenda Lee, who was long past her commercial peak, but her voice was still strong and lovely and complemented his nicely. The track features a tasteful string arrangement which gives it a little more countrypolitan feel than the rest of the album.

Despite a couple of weak spots, namely “Life’s Little Ups and Downs” and the self-penned and forgettable “I Still Love You”, RVS III is packed with top-drawer material and it quickly attained platinum status as its two predecessors have. However, by this time the formula of a few rockabilly numbers and a lot of ballads, a few old songs and a few new was starting to become predictable and may partially account for Shelton’s relatively brief reign at the top of the charts. Nevertheless, it is an album well worth listening to and I enthusastically recommend it.