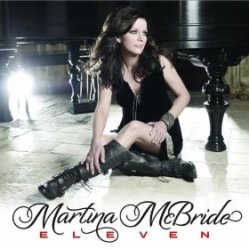 In recent years Martina McBride has struggled to remain commercially relevant. Having landed only one Top 10 hit in the past seven years, she left her longtime label RCA last year in the hopes of reviving her flagging career. Unfortunately, the move to Republic Nashville has done little to change her commercial fortunes, as it has become apparent that her chart decline is due not to any neglectfulness on the part of RCA, but to her seeming inability to select decent material. She shares co-writing credits on six of Eleven’s tracks, the most she’s ever contributed to a single album, but for the most part this doesn’t result any measurable improvement over her other recent efforts.

When an artist ends a long term relationship with the label where she scored her greatest achievements, it can signal a bold new change in direction or a continued long period of stagnation. In Martina’s case, it’s definitely a case of the latter, as Eleven is more or less in the same vein as her last few, very lackluster albums for RCA. Her debut single for Republic Nashville, “Teenage Daughters”, offered a brief glimmer of hope that she might be getting her mojo back, but those hopes were quickly dashed as rest of the album is mostly a relapse back into the bubblegum pop she’s been peddling since 2006.

Though not a great song by any means, “Teenage Daughters” showed a spunkier side of Martina, which we’ve not seen in quite some time. Written by McBride and the Warren Brothers, the song deals with the challenges of raising adolescent daughters and was in no doubt inspired by Martina’s real-life experiences. The record peaked at #17. It was followed by what appears to be the intended centerpiece of the album, the God-awful “I’m Gonna Love You Through It”, the most shameless attempt to manipulate the listener’s emotions to hit the airwaves since “God’s Will”. McBride and producer Byron Gallimore were likely hoping for a big power ballad hit that explores serious issues, in the vein of “Concrete Angel” or “A Broken Wing”. The problem is that the lyrics lack any subtlety whatsoever. It’s currently at #19 on the charts, but since most radio listeners really don’t want to hear songs about people suffering from cancer, I’ll wager that this one isn’t going to go much higher.

Most of the other tracks on the album, from the opening track “One Night” to the annoyingly sing-songy “Always Be This Way” and “Broken Umbrella” sound like throwbacks to 1970s-era Top 40 AM radio, reminiscent of the poorer efforts of artists like Helen Reddy, The Carpenters or The Captain and Tennille.

Despite these considerable drawbacks, Eleven does have its brighter moments. Though not very country, “Marry Me”, a cover of last year’s minor adult-contemporary hit by the pop/rock group Train, is quite pleasant. It is performed with the song’s writer and Train’s lead singer Pat Monahan. The bluesy “Whatcha Gonna Do”, written by Rachel Thibodeau, Rebecca Lynn Howard and Jason Sever also works quite well and I’m guessing that it will eventually be released as a single. And things improve considerably with the album’s last three tracks, “Summer of Love”, “When You Love a Sinner” and the stunningly beautiful closing track “Long Distance Lullaby”, which Martina co-wrote with Mark Irwin and Josh Kear. These three numbers are the album’s best tracks, and serve as a reward of sorts for having persevered through the earlier tracks.

Having been disappointed by Martina’s previous three albums, I wasn’t expecting Eleven to be an outstanding effort, and it definitely isn’t, but it’s worth the $4.99 that Amazon MP3 is currently asking for it (the version with digital liner notes is $9.49). A deluxe version with four bonus tracks and three music videos is available exlusively from Target stores.