Clint Black’s swan song for RCA was the first album he produced by himself and arguably his most ambitious. As the title suggests, D’lectrified was recorded entirely with acoustic instruments, but rest assured, it is no quiet, stripped-down unplugged affair. By implementing a variety of instruments not usually used in country music — such as the clarinet, various saxophones and percussion, as well as a string section — he achieves a rich, full sound which causes the listener to sometimes forget that no electric instruments were used.

The album is also a departure from Clint’s usual practice of writing or co-writing every song. There is a great deal of cover material here and his choices are quite eclectic — from The Marshall Tucker Band’s “Bob Away My Blues” which opens the album, to Leon Russell’s “Dixie Lullaby” (done as a duet with Bruce Hornsby) and the novelty tune “Ode To the Galaxy”, which is quite likely the first time a major country music star covered Monty Python. A slightly re-worked version of “Are You Sure Hank Done It This Way” appears as a tribute to Waylon Jennings, whose name is substituted for Hank’s in the title and lyrics. None of these tunes are in the vein of what fans had come to expect from Black, but all of them were quite well done.

The rest of the album is more conventional. Clint’s wife Lisa Hartman Black joined him on the sentimental and AC-leaning “When I Said I Do”, which was the album’s first single. I remember cringing upon learning that Clint’s wife would be his duet partner. I was unaware that she had released four unsuccessful pop albums between 1976 and 1987. Though she was no Loretta Lynn or Dolly Parton, she was a better vocalist than I’d expected. Radio loved the record, and it quickly rose to #1. It was Lisa’s first chart-topper and Clint’s last. It also reached #31 on the Billboard Hot 100. The album’s second single was “Been There”, on which Clint is joined by his co-writer Steve Wariner. Released in January 2000, it reached #5, becoming the last Top 10 hit of Clint’s career.

The album’s best track by far is “Love She Can’t Live Without”, a Black co-write with Skip Ewing. It should have been a monster hit, but it stalled at #30. I suspect that with Clint’s contract with RCA about to expire, the label did little to promote the record. The album’s weakest cut is “Harmony”, a duet with co-writer Kenny Loggins. A sappy and syrupy affair that plods along for nearly five and a half minutes, it is the album’s sole dud and quite possibly the worst thing Black ever recorded.

The remainder of D’lectrified consists primarily of re-worked versions of some of Clint’s earlier hits, such as “Burn One Down” and “No Time To Kill”. Both were done in a bluesy, jam-session style, which ironically are quite loud for acoustic recordings and Clint seems to be struggling at times to be heard over the arrangements. Neither holds its own against its original hit version; however, an acoustic guitar-led instrumental version of “Something That We Do”, which appears as a hidden track at the end of the album is quite nice.

Unlike all of Clint’s previous albums, D’lectrified failed to attain platinum status, though it did earn gold certification (his last studio album to do so). After the album was released, Black left RCA to found his own label, Equity Music Group, which was meant to introduce a new business model to the music industry by allowing artists to keep a greater share of the profits they generated. The experiment did not succeed, and neither did any of Clint’s recordings for the fledgling label. D’lectrified, his last truly successful album, was an adventurous project and is worth seeking out. 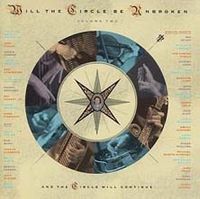 In the 1980s, however, after a period using the name the Dirt Band, the Nitty Gritty Dirt Band rebranded themselves and forged a very successful career in contemporary country music. In 1988, they decided the time had come to produce a follow-up to their classic. Many of the original collaborators had died, and this time the guests included some contemporary acts and some artists from outside country music altogether, or who were from related genres. The album liner notes say, “This time they drew the circle bigger”, and talk about “the many hyphenated hybrid styles writers have used to describe all sorts of American music that comes from the heart. Big enough to embrace gospel, blues, honky tonk, Cajun and traditional folksong”. In other words, the term might not have been invented yet — but in many ways this was perhaps one of the the first self-consciously Americana albums. The result was a little more commercial-sounding than the original, but it strikes a fine balance between showcasing musical history and showing that that heritage was a living thing. END_OF_DOCUMENT_TOKEN_TO_BE_REPLACED