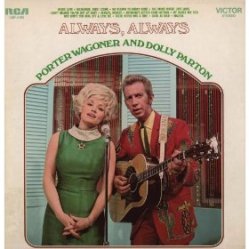 Released in the summer of 1969, Always, Always was the third duet album from Porter Wagoner and Dolly Parton. Today it is one of only two of their original albums that is available for digital download. Why this one was chosen to be made available over some of the others is a mystery, as it does not contain any of the duo’s best remembered hits. It is, however, a very solid collection and well worth listening to.

Two singles were released from the album, both of them ballads. The first was Harlan Howard’s “Yours Love” in which the pair profess their undying love for each other. It reached #9. The second single, the slightly bland title track written by Joyce McCord reached #16. The album’s best cut is the opening number, “Milwaukee, Here I Come”, a remake of a song that had reached #13 the prior year for George Jones and Brenda Carter. The tongue-in-cheek uptempo number is about a starstruck Wisconsin couple who are about to return home after an extended stay in Nashville:

I’m gonna get on that old turnpike and I’m gonna ride
I’m gonna leave this town ’til you decide
Which one you want the most them Opry stars or me
Milwaukee here I come from Nashville, Tennessee

Another winner is a very nice cover of “I Don’t Believe You’ve Met My Baby”, which had been a #1 hit for The Louvin Brothers in 1956. Younger listeners may be familiar with the Alison Krauss version released in 1995. “Why Don’t You Haul Off and Love Me” is very nice mid tempo toe tapper that features an excellent steel guitar solo, as do many of the other songs on the album.

The album also contains three of Dolly’s original compositions. “My Hands are Tied” and “No Reason To Hurry Home” are both solid efforts, while “Malena” finds Dolly once again revisiting the dying child theme. It’s a pretty song with a nice vocal performance from Dolly, followed by a recitation by Porter which reveals the child’s fate, but it’s a little too maudlin and morbid for my liking. I could have done without this one but the rest of the album is first-rate. 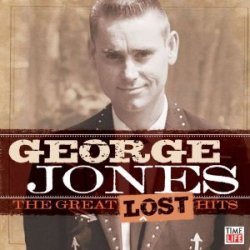 Released in February 2010, The Great Lost Hits chronicles George Jones’ years as a recording artist for the Musicor label, from 1965 to 1972.  Jones had been recording for the United Artist label since 1962, and Musicor was launched as a division of the UA operation. Before his Epic years – the label that took his career to new heights and where Jones recorded for nearly 2 decades – George Jones recorded some of his best-loved hits, and truly developed the vocal style he would become renowned for and that would inspire countless other country singers that have come along since.  Listening to this collection, you can almost hear that legendary singing style come to life, and hear some mighty fine country songs, from arguably the genre’s greatest voice, in the process.

This two-disc collection is a wonderful snapshot into the catalog and career of George Jones up to 1972.  By that point, he was already a long-time country star, having spent nearly two decades honing his craft.  The selections here range from silly to stone-country, from devastating to rib-tickling, and back again.  Most are given very traditional arrangements, complete with crying fiddles, rolling steel guitars, and weeping vocals.  But in a bit of foreshadowing to the layered production of the Billy Sherrill years ahead, we can also hear Jones changing over to the Nashville Sound of the time, apparently willing to adapt his sound accordingly to change with the times.

‘Four-O Thirty-Three’ is a bouncy number that references the house number where the narrator and his little lady have built a happy home.  The acoustic guitar-laden tune found its way to the top 5 in late 1966.  ‘Milwaukee, Here I Come’, another top 20 hit, is a jaunty duet with Brenda Carter.  The pair sing of a man leaving Nashville, heading back to the beer-making capital.  He’s fed up with having to compete with all the Opry stars around town for his lady’s affections.

That’s not to say that all the up-tempo tunes are as enjoyable. ‘I’m A People’, which was released as a single and managed to reach the top 10, resting at #6 sounds very out of place, and stands as a blemish in Jones’ catalog.  Aside from the unsettling vocal from Jones, which often sounds like its one key too high and features shiftless ‘shoobie doobie doh’s’ in the chorus, the lyric to this novelty tune is very strange. George sings here of how he longs to be a monkey in a zoo.  I’ve often fantasized about casting away all my responsibilities too, but I always remained human in my dreams, or at the very least, uncaged.

END_OF_DOCUMENT_TOKEN_TO_BE_REPLACED

George Jones released this song as a single in 1968. The record reached #12 on the Billboard country singles chart; however, this is a record that suffered from timing. It would have been a much better recording if it had been done a few years earlier — or a few years later. George’s duet partner Melba Montgomery had left Musicor Records for Capitol, and his future duet partner Tammy Wynette was signed to Epic. As a result, both women were contractually prohibited from recording the song with him. Instead, a singer named Brenda Carter, who was on the Musicor roster, was brought in to be George’s duet partner. To put it charitably, she was no Melba or Tammy. Still, it’s a good song. This 1969 performance with Tammy on the Wilburn Brothers Show shows what the record might have been like had Tammy been available to record it.

Special thanks to Paul Dennis for some of the background information.