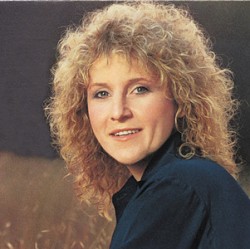 With one of the more recognizable voices in the genre, Lacy J. Dalton blazed across the skies of country music during the 1980s, producing a number of memorable songs along the way. While not an overwhelming commercial success (only nine of her songs made the Billboard country Top 10) as an artist she impressed with her heartfelt vocals and gritty song interpretations. People magazine referred to her as “Country’s Bonnie Raitt,” a description with which few would differ.

Lacy J. Dalton (born Jill Byrem on October 13, 1946 in Bloomsburg, Pennsylvania), was born into a musical family. Her father, mother and sister all played musical instruments and sang. Like many of her generation, Dalton’s early influences included the classic country sounds of her youth, the sounds of the folk music revival of the early 60s known as the “Hootenanny” era (artists such as Bob Dylan and Joan Baez), and the jazz/blues of artists such as Billie Holiday and Big Mama Thornton.

Following completion of high school, Dalton briefly attended Brigham Young University. But her restless spirit prevailed, and she dropped out and drifted around the country for a time, eventually arriving in Los Angeles and then Santa Cruz, where she performed as a protest-oriented folksinger. During the later ’60s, she sang with a Bay Area psychedelic rock band called Office, becoming Jill Croston when she married the group’s manager. This marriage did not last long as her husband died in a swimming pool accident.

During the late 1970s Lacy reinvented herself as a country singer adopting the stage name of Lacy J. Dalton. After an initial rock recording on the Harbor label in 1978, in 1979 she landed a recording contract with Columbia after Billy Sherrill heard a demo tape of her singing country music. Her Columbia debut, “Crazy Blue Eyes,” reached #17, followed by her recordings of “Tennessee Waltz” (#18) and “Losing Kind of Love” (#14).

The first three singles helped Lacy win the CMA’s Best New Artist Award. After that, her career kicked into high gear with a string of top ten records that took her through 1983, including “Hard Times” (#7) , “Hillbilly Girl With the Blues” (#8), “Whisper” (#10) and her biggest record “Takin’ It Easy” (#1 Cashbox/#2 Billboard). Everybody Makes Mistakes,” backed with “Wild Turkey,” was a double-sided hit with the A side reaching #5.

While not her biggest hit, 1982’s “16th Avenue” is probably her best remembered song, reaching #7. A 1983 cover of Roy Orbison’s “Dream Baby (How Long Must I Dream)” concluded her visits to the top ten, although she continued to record for Columbia through 1987. The changing tastes of the country music market, away from her ‘blue-eyed soul‘ style toward a more traditional style, greased her slide down the charts. A change of record labels, to Universal in 1989 and Capitol/Liberty in 1990 failed to arrest the slide, although “The Heart” in 1989 and “Black Coffee” in 1990 both reached the top 15, the latter song being her last appearance on the Billboard charts.

Lacy J. Dalton continues to write and record music, and tours the United States and Europe.

You can keep up with Lacy J. Dalton on her website.

Vinyl
As is always the case, all vinyl is out of print. You can sometimes find her records at used record shops, thrift shops or on the internet. MusicStack seems to be the best source for vinyl on the internet as it is a clearinghouse for many dealers.

Lacy issued nine albums on Columbia. One of these albums is a greatest hits collection, but they are all good albums. Trust me – if you like Lacy’s voice, you’ll like the albums. If you find any albums on Universal, Liberty or Capitol, you may as well buy them too.

CD
The Ernest Tubb Record Shop currently has her Greatest Hits available for $9.95. A ten song CD, this one has ten of her Columbia era songs and indeed is accurately titled. ET also has Best of the Best CD on the King label – same songs but I think these are remakes.

Lacy’s most recent release of new material is a Hank Williams tribute album titled Here’s To Hank. Released in 2010, the album finds Lacy tackling a dozen Hank Sr. classics. While Lacy sticks to the obvious songs such as “Your Cheating Heart”, Hey Good Looking” and “You Win Again”, the fact remains that if (1) you take a really good and soulful singer (2) have her sing twelve of the greatest songs ever written and (3) add an appropriate crew of musicians and careful arrangements by Steven Swinford that update but do not lose the feel of the originals, then you will have a really good album. Such is the case with this album.

Lacy’s website has a newer CD (from 2004/2008) Last Wild Place which has some newer material plus five of her old hits. This album is (more or less) acoustic.

In late 2012 the Morello label released a two-fer comprised of two of Lacy’s Capitol albums from 1989 and 1990, Survivor/Lacy J. These albums found Lacy writing only three songs, but the lack of original material does not mean lack of quality as there are some imaginative covers to be found here including Paul Simon’s “Still Crazy After All These Years”, Kris Kristofferson’s “The Heart” and the classic Guy Clark song “Old Friends”. Amazon and Ernest Tubb Record Shop both have this album available.

In the past other CDs have been available including a hits collection on the Capitol/Liberty material.

Amazon has most of Lacy’s material available as digital downloads, but be sure to listen to the samples as some of the tracks are re-makes.