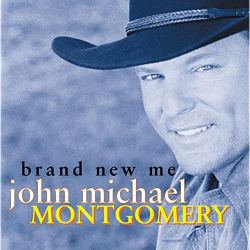 The last couple of singles from Home To You had not got the new millennium off to a good start for John Michael Montgomery, but later in 2000 he came up with his biggest hit for years.

‘The Little Girl’, written by Harley Allen, is a story song allegedly based on a true story about a neglected child who witnesses the fatal culmination of her father’s domestic violence, and later tells her loving foster parents she recognises a picture of Jesus as the one who protected her on the night her father killed her mother and herself. A gently soothing melody and harmonies from Alison Krauss and Dan Tyminski make this a very pretty sounding song. It topped the Billboard country charts for three weeks.

The two other singles from JMM’s gold-selling 2000 album Brand New Me fell short in comparison. The up-tempo and rather rowdy country-pop ‘That’s What I Like About You’ was probably too much of a contrast in tone to do well while ‘The Little Girl’ was still getting a lot of radio play, and it isn’t a strong enough song to stand on its own. ‘Even Then’ (written by Pat Bunch and Shane Teeters) is better, a smooth AC-leaning love song which plays to JMM’s vocal strengths. However, neither song cracked the top 40.

‘That’s Not Her Picture’ is a beautiful pure country ballad written by Bill Anderson and Gary Burr, which was also recorded in 2000 by Jason Sellers, ex-husband of Lee Ann Womack, who was an aspiring artist at the time. A tasteful steel-led arrangement is perfect for the song and JMM sounds great on the poignant song abot a man who has torn up his ex’s real photos (presumably in anger or grief) and kept a standard shot sold with his wallet purely because it looks a little like her.

Another highlight is ‘Thanks For The G Chord’, written by Byron Hill and Mark Narmore, a tribute to a loving father who taught him music with other life advice.

Also very good is ‘Bus To Birmingham’, an emotional song written by Jess Brown and Tony Lane about a man watching his loved one leaving, thinking he has done the right thing driving her away:

‘Weekend Superstar’ is a fun honky tonker with some nice fiddle about letting loose as a release from a hard week’s work.

The title track, which opens proceedings, is an upbeat song about survival, written by Kris Bergnes and Lee Thomas Miller. ‘Real Love’ (from the pens of Kent Blazy and Neil Thrasher) is a mid-paced country pop love song which is fairly forgettable.

The closing ‘I Love It All’, co-written by JMM himself with Blair Daly is a tribute =e to his love of his career as a musician, and is pretty good.

Overall, a pretty strong album which is worth finding, esecially if you like JMM.

Leave a comment Posted by Occasional Hope on May 30, 2016 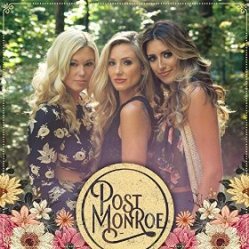 The latest female trio in country music, Post Monroe consists of two one-time Nashville Star contestants, Whitney Duncan (who had a short deal with Warner Brothers and a hit duet with Kenny Rogers) and Ashlee Hewitt (married to Jesse Keith Whitley, son of Lorrie Morgan and Keith Whitley), who have teamed up with Shelby McLeod. Their new EP, produced by Lady Antebellum’s Dave Haywood and Chuck Ainlay (who worked on the Pistol Annies projects). The sound is pop country, but with more country than pop.

The single ‘Red Hot American Summer’ has a nice banjo lead-in but a rather cliche’d lyric about rural partying which sounds as though it was written for radio. All three girls wrote this with Blair Daly. The three were joined by Dave Haywood and Dave Thompson to write ‘Dixie Dust’, which looks back nostalgically at a small town Southern upbringing and is pretty good.

The other songs are all Whitney Duncan co-writes. The best song by far (unfortunately marred by some clashing percussion) is ‘Lucky One’, which she wrote with Kelly Collins. This reflects on a bullet missed as the protagonist is not jealous her toxic ex has a new love, but deeply grateful:

‘Hell On Me’, is a ballad Whitney wrote with Chris Tompkins. The production is a bit jarring on the chorus, but it is pretty good with a melancholy undertow as the narrator falls for a new guy while knowing it is going to end badly.

‘Half Hearted’ is quite a nice song demanding commitment from a lover, but one which ironically lacks real emotional conviction in its delivery. Whitney wrote this one with bandmate Ashlee Hewitt, and with Greg Decker.

I quite enjoyed this release, although I would have preferred a slightly more stripped down production. But it’s a pretty fair step in the right direction.