Leave a comment Posted by Jonathan Pappalardo on February 22, 2016 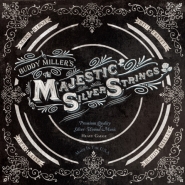 Released in 2011, The Majestic Silver Strings finds Buddy Miller teaming up with guitarists Bill Frisell, Marc Ribot and Greg Leisz for an album combined mostly of classic country covers. The group is joined by a slew of guest vocalists along the way.

Much as I suspected, the record is a guitar-based album comprised of instrumentals with the guest artists providing the vocals. There are, however, a few such instrumentals sprinkled throughout. The album opens with a haunting take on Eddy Arnold’s “Cattle Call.” The band strips the tune of its western themes, which is a bit odd but otherwise excellent. “Freight Train” is jauntier and just as sonically appealing.

Lee Ann Womack joins the group on two tracks. “Meds” is a dark ballad about a woman in a mental institution that renders Womack, who sings in a breathy tone, almost unrecognizable. “Return To Me” features a long instrumental opening before Womack begins with an aching vocal.

Ribot takes the reins on three tracks. “Barres De La Prison,” a prodding ballad he doesn’t elevate with his dreary, but appropriate, vocal. The group turns “Why Baby Why” into 1950s rockabilly funk, which comes off slightly jarring. For his third contribution, Ribot tackles “Bury Me Not on the Lone Prairie.” This track is also extremely slow and very difficult to get into.

Ann McCrary joins the group on “No Good Lover,” a jazzy number with Western Swing undertones. Chocolate Genius fronts “Dang Me,” which is one of the stronger tracks on the project. Although I do find it weird, they find the sinister side of the song Roger Miller didn’t even hint at with his original recording.

Patty Griffin joins the band on “I Want to Be with You Always,” a brilliant recording that finds her harmonizing with Miller

framed in Pedal Steel. Shawn Colvin takes the lead on “That’s The Way Love Goes.” The Merle Haggard standard is turned into a sparse ballad that beautifully allows her voice to shine through.

“Why I’m Walkin’” is yet another ballad, this time fronted by Emmylou Harris. The track is very slow and isn’t helped by Harris’ far too breathy vocal. The final track, “God’s Wing’ed House” spotlights Miller’s wife Julie. It’s actually a duet between the pair and it’s lovely.

To say the least, I didn’t enjoy this album. I adore the concept and found a couple of the tracks appealing, but it just didn’t do much for me overall. The jazzy overtones that complete the sonic makeup of the record just aren’t to my taste at all. I still think you should seek out your own opinion as it could differ greatly from mine. This isn’t a terrible album in the least and I can see the quality within it. But it just wasn’t for me.