For most of this decade, the story of Dixie Chicks has been one of separate lives, at least as far as recordings are concerned. Martie & Emily have released two albums as Court Yard Hounds and Natalie Maines released her own solo record, Mother, in 2013.

Maines has said the album came together serendipitously through sessions with Ben Harper. She has gone on to say she had no idea they were even making an album until they had ten recorded songs. In truth, this isn’t the first time Maines ventured outside Dixie Chicks. In 2008 she appeared alongside Neil Diamond for the spellbinding ballad “Another Day (That Time Forgot)” and she also contributed a version of Beach Boys “God Only Knows” for the final season of the HBO drama Big Love.

Mother is a pop-rock album that makes offers no apologies about its lack of anything even remotely resembling country music. Maines even went as far as to distance herself from country music, saying she never really liked the genre at all and said she found Fly unlistenable because she hated her accent on the songs. This all came from Rolling Stone Magazine, which exaggerates everything for personal gain, so her comments have to be taken with a grain of salt.

The album itself isn’t very imaginative at all, with the ten songs consisting mostly of cover tunes with only a couple originals. The selections themselves are great, but one would’ve liked Maines to let loose a bit with her own pen, especially since it had been seven years since she entered a studio to record anything for herself.

Being mostly a country music fan, I’m not overly familiar with most of these songs. Her version of the title track doesn’t deviate too much from Pink Floyd’s original. I do really like her take on Dan Wilson’s “Free Life” and her interpretation of Jeff Buckley’s “Lover, You Should’ve Come Over” is very good.

A highlight for me is the blistering “Silver Bell,” which was the title track of Patty Griffin’s unreleased album where Maines found both “Truth No. 2” and “Top of the World.” The track, while overly loud, is a delight.

Another notable selection, “Come Cryin’ To Me” is an outtake from the writing sessions for Taking The Long Way. The song, which was co-written by the trio with Gary Louris of The Jayhawks, was deemed too rock to appear on the album. Maines had said she wanted to have her bandmates appear on the album, as co-writers, at least once. The lyric is excellent, although I can’t really decipher the meaning of the lyric:

The sins of your father

From one to another

From lover to lover

From under the covers

When the world’s on your shoulders

When there’s nowhere to run to

You can come crying

Come crying to me

You know how to fly

On the wings of disaster

You try to stand still

But you keep going faster

You thought it’d be easier

The tables will turn

And they won’t even warn you

When the world’s on your shoulders

And you just keep on sliding

When there’s nowhere to run to

You can come crying

Come crying to me

When the night seems colder

But the sun’s gonna shine

I won’t leave you behind

No you won’t stay behind

My issue with Mother isn’t that it’s a pop/rock recording. Maines is excellent vocally throughout and it doesn’t feel like a country artist suppressing their twang to fit into a bigger musical landscape. My problem is the album is sonically horrid. The arrangements are very muddled and extremely loud, with no real way to decipher between instruments. This just doesn’t feel like a cohesive album as much as a collection of songs and I don’t hear much masterful artistry in the recording as a whole.

Mother honestly could’ve been so much more. Dixie Chicks put so much into Taking The Long Way and Martie and Emily put effort into Court Yard Hounds. I just wish it had extended here with Maines. Mother could’ve been great. As it stands, it’s just an odd and very strange missed opportunity.

Dixie Chicks Live: long time gone, but back once again 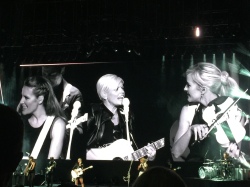 If there was ever a time for Dixie Chicks to mount a comeback tour in the United States, it would be now, while we’re in the midst of the most decisive presidential election in our nation’s history. Dixie Chicks are a political band, for better or worse, and not just because they register folks to vote in the concession area before, during and after each show.

The election does play a role, albeit a small one, in this latest production. The MMXVI Tour, as it’s being called, exists to commemorate the watershed moment Natalie Maines replaced Laura Lynch as lead singer twenty years ago. The success that followed forever changed the trajectory of mainstream country music, although this show, fierce country-tinged rock, spends more time ignoring that legacy than honoring it.

The balance skewed Taking The Long Way-heavy (although “Easy Silence, complete with a lyrical video, and the unexpected and rarely performed “Silent House” were fabulous), which allowed banjos, fiddles and dobros to act as accents opposed to centerpieces for the majority of the evening. But this being a Dixie Chicks show, they honored their past with fiery renditions of “Sin Wagon,” “Wide Open Spaces,” “Some Days You Gotta Dance,” “Mississippi” and “Not Ready To Make Nice.” Lush renditions of “Cowboy Take Me Away” and “Landslide” were also excellent, while the latter had a beautiful backdrop containing reflective images of the Chicks’ heads.

The rock theme was matched by the black and white set, minimal yet powerful, which hit you in the face with lights and sound as Dixie Chicks took the stage for the one-two punch of “The Long Way Around” and “Lubbock or Leave It.” They added significant muscle to the uptempos from Home, giving “Truth No. 2” and “Long Time Gone” a charge of energy unmatched by their humble acoustic beginnings.

The show is broken into two separate sections at the conclusion of highlight “Goodbye Earl,” and is bridged by a black-and-white car chase in which the ladies race to the sounds of Motörhead’s “Ace of Spades.” They returned with the night’s strongest segment, an acoustic set that hinted at their beginnings (“Traveling Soldier” and “White Trash Wedding”) while nicely showing where they could go with a cover of Beyoncé’s “Daddy’s Lessons,” from her recently released Lemonade. (They excluded their brilliant reading of Patty Griffin’s “Don’t Let Me Die In Florida,” for obvious reasons). They concluded this portion with an instrumental they concocted that had Maines banging a single drum framed in bluegrass beats.

They skewed the presidential race jib-jab style on “Ready To Run,” my favorite moment of the whole show, which ended with red, white and blue confetti festively blanketing the audience. The eluded to Donald Trump just twice more; giving him devil horns during “Goodbye Earl” and when Maines said she’d protect a bug that had flown on stage by ‘building a wall’ around it.

It actually wasn’t Trump, but the recently deceased Prince that dominated the evening. They set the stage for the evening with him singing “Let’s Go Crazy” (after a video about wrongly incarcerated inmates, Dixie Chicks trivia questions and a random selections of Maines’ always colorful tweets) and treated the crowd to a stunning cover of “Nothing Compares 2 U” that brought fourth unforeseen colors in Maines’ voice soaked in a backdrop of his giant purple symbol. They ended the evening with Ben Harper’s “Better Way,” which they dedicated to the Pulse Nightclub victims in Orlando.

This Mansfield, MA stop on their tour was my fourth time seeing Dixie Chicks live. I saw them open for George Strait in 1999 and headline their own Top of The World (2003) and Accidents and Accusations (2006) tours. I was supposed to see them open for Eagles in 2010 at Gillette Stadium, but an unforeseen engagement got in the way. Each show has been dramatically different from the last, providing its own distinct flavors and textures.

While I’ll likely always regard their 2003 outing as their finest, this show wasn’t without considerable charms. The Chicks haven’t lost an ounce of the spunk they’ve cultivated over the past twenty years. They may have been pushing a bit too hard – the show was much louder than it needed to be – but the true essence of Dixie Chicks came through wonderfully. They’ve only gotten better, which is a testament to their incredible prowess. Ten years was a long time, but it was certainly worth the agonizing wait.