Album Review: Loretta Lynn – ‘Before I’m Over You’ 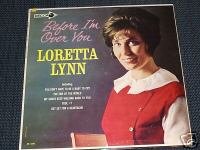 Loretta’s second album in 1964 saw her success continue with two top 5 singles, both written by Betty Sue Perry (1934-1974), a staff songwriter for Sure-Fire Music, the publishing company owned by the Wilburn Brothers. The title track, peaking at #4, is a plaintive lost love tune. The bouncy ‘Wine, Women And Song’ is more typical sassy Loretta fare, complaining about her man’s failings and threatening retribution. Loaded with honky tonk piano, it was her biggest hit to date at #3.

Loretta also wrote a couple of songs. ‘Where Were You’ is a good song about the recriminations after a failed relationship. The backing vocals sound a little dated but do not overwhelm it. ‘This Haunted House’ is another sad song about clinging to memories.

It was commonplace in the 1960s for artists to cover contemporary or slightly older hits on their albums. The up-tempo ‘Singin’ The Blues’ had been a country hit for Marty Robbins and a pop one for Guy Mitchell in 1957. It was revived by Gail Davies in the 1980s, and new Hall of Fame inductee Randy Travis covered it on his No Holdin’ Back album. Loretta’s robust version stands up well against other versions.

Freddie Hart’s ‘Loose Talk’ was a seven-week #1 in the 50s for Carl Smith. The lyric about false gossip threatening a marriage might be a credible cover by a contemporary artist plagued by tabloid rumors, and Loretta’s version is solid.

‘The End Of The World’ was a monster multi-genre hit for Skeeter Davis in 1962, and Loretta’s version is more conventionally country than Skeeter’s heavily orchestrated take, and nicely done. The songwriting team of Sylvia Dee and Arthur Kent also contributed ‘Who’ll Help Me Get Over You’, about the downside of being someone else’s shoulder to cry on. Sweet steel guitar adds the right touch of melancholy beneath Loretta’s emotional vocal, and I like this one a lot.

‘You Don’t Have To Be A Baby To Cry’ was originally a pop song of some vintage. It had most recently been a pop hit for British girl duo The Caravelles, but Loretta’ version owes more to Ernest Tubb’s 1950 country version.

Country standard ‘My Shoes keep Walking Back To You’ is actually a Bob Wills penned tune, but is a traditional country shuffle, which is a real highlight here, ideally suited to Loretta. The same goes for the plaintive ‘Fool No. 1’, which was originally a hit for Brenda Lee. It seems to be the only song written by Sure-Fire writer Kathryn Fulton, and was the song which Loretta demo’d to get her Decca deal (thanks to Ken Johnson for that snippet). Finally, album closer ‘Get Set For A Heartache’ is another classic country ballad, backed with prominent fiddle.

Although much of the material consisted of covers, this is an excellent album of real country music from a rising star.