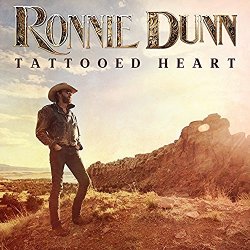 The Nash Icon movement, as I understood it, was meant to provide a platform for veteran artists where they wouldn’t have to compete with the younger generation for radio airplay. Why then, has nearly every Nash Icon artist released an album that still seems to be an attempt to rack up radio hits? Ronnie Dunn’s latest effort follows down the same trail that Hank Williams Jr, Martina McBride and Reba McEntire blazed ahead of him.

Tattooed Heart is Dunn’s inaugural release for the label. He co-produced the set with Jay DeMarcus. It consists of twelve songs written by some of Nashville’s finest, ranging from Liz Hengber, Steve Bogard and Bob DiPiero to Jim Beavers, Jon Randall and Tommy Lee James. Dunn had a hand in writing two of the songs, including the album’s best track “She Don’t Honky Tonk No More”, co-written with Nikki Hernandez and Andrew Rollins.

Dunn is joined by a couple of old friends on a pair of songs. His current single “Damn Drunk” features his former partner Kix Brooks, whose presence would go unnoticed if he weren’t credited on the label. Reba McEntire makes a more audible contribution on “Still Feels Like Mexico”, which I’m guessing will be the next single. The song itself isn’t particularly interesting, however. The album’s first single was “Ain’t No Trucks In Texas”, which peaked at #42 on the airplay chart last year.

The quality of the material itself is not in question and Ronnie Dunn’s voice remains one of the best in country music. What makes Tattooed Heart such a mixed bag is the production which is too heavy-handed on almost every track. “Ain’t No Trucks In Texas” is too loud, the strings are too intrusive on the otherwise very good “I Worship The Woman You Walked On” and ditto for the background vocalists on the 1950s-sounding title track. The self-penned “I Wanna Love Like That Again” is more restrained, although the song itself isn’t very country-sounding. The aforementioned “She Don’t Honky Tonk No More”, the album’s sole traditional song, is flawlessly executed. I wish the rest of the album were more in that vein; it’s more in line with what the target audience — those of us who have been Brooks & Dunn fans for nearly 25 years — really want to hear.