Album Review: The Forester Sisters – ‘All I Need’

Leave a comment Posted by Occasional Hope on June 17, 2019 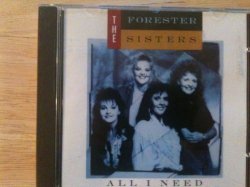 The Forester Sisters grew up singing in church, and as their career progressed, they wanted to share their faith with their fans. In 1988 they released a side project double album of hymns entitled Family Faith on Heartland Music, and the following year came All I Need on their main label Warner Brothers.

There was even an official single, ‘Love Will’, written by Don Pfrimmer and Byron Gallimore. This is a really sweet idealistic song backed with a string arrangement. It had in fact appeared on their previous album, Sincerely.

The title track is a mellow ballad which could be read as a secular love song, but in the context of this album is clearly directed at God. It was written by Steve Bogard and Rick Giles.

The bright and airy ‘Still In The Spirit’ was written by John Scott Sherrill and Thomas Cain.

Christian Contemporary songwriter (and later an artist in that genre himself) Chris Rice wrote ‘Already There’, a beautiful tender ballad about heaven.

‘This Old House’ is not the Stuart Hamblen classic but a pleasant mid-paced song about a real home, written by Greg Davis and John Randall Dennis.

‘Peace Within’ is a Christian country standard, written by Dickey Lee, Allen Reynolds and Susan Taylor. The girls had previously released their delightful version of this song on their Family Faith album, together with gospel favorite ‘Precious Memories’ and the uplifting hymn ‘Love Lifted Me’. Also repeated is a gorgeous soulful reading of ‘Amazing Grace’, performed as a duet with Larnelle Harris, a Southern gospel singer with a rich voice.

The album closes with the traditional ‘Motherless Child’, performed as an ethereal accappella tune.

Some of the production is a bit dated now, but it is not unpleasant. The girls are in great voice and this is an excellent religious album with some country elements.