Leave a comment Posted by Occasional Hope on May 20, 2019 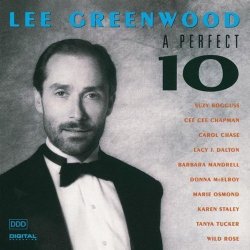 The winds of change swept through country music in the late 1980s, with younger stars reviving more traditional sounds. Lee Greenwood’s singles were getting less radio play than they had earlier in the decade, and he must have realised that if he wanted to stay relevant he needed to make some changes. In 1990 he moved from his longstanding label MCA to Capitol, and for his second album for that label (then using the Liberty name), in 1991, he released a duet album with ten female vocalists. They were mainly newcomers the label wanted to promote with a few of Lee’s contemporaries.

The only single was ‘Hopelessly Yours’, a duet with Suzy Bogguss, who was about to make her breakthrough. It peaked at #12 but deserved better, as it is a beautiful song written by the great Keith Whitley and Curly Putnam with hitmaker Don Cook, sung by both vocalists with a wistful tenderness, and tastefully produced with some lovely steel guitar.

One of the label’s biggest stars at the time was Tanya Tucker. ‘We’re Both To Blame’ is a traditional sounding waltz about a couple whose marriage is breaking down – another really lovely track.

All-female bluegrass-country group Wild Rose collaborate on the vibrant up-tempo ‘The Will To Love’, which I enjoyed a great deal.

Karen Staley was better known as a songwriter, but released a couple of excellent albums herself in the 90s. I don’t believe she was ever formally signed to Liberty or Capitol (she certainly didn’t release anything for them), but label boss Jimmy Bowen had produced her 1989 MCA album Wildest Dreams. She has an distinctive and unusually deep voice for a woman, and almost overpowers Greenwood on the brassy ‘I’m Not Missin’ Anything’. Cee Cee Chapman, a Curb artist with another deep alto voice, has a boring song for her duet with Lee, ‘You’re Not Alone’.

Carol Chase has an excellent voice and is well matched to Lee on the enjoyable mid-paced pop-country ‘Looking At A Sure Thing’. ‘If You Don’t Know Me By Now’ is a cover of an R&B classic sung with Donna McElroy, who has provided backing vocals on many country records but is predominantly a gospel singer herself. This version of the song pays not the slightest attempt to sound country, but is pleasant enough listening in its own vein, with a strong soulful vocal from McElroy.

Of the older artists, Lacy J Dalton is wasted on ‘From Now On’, a nice enough but bland MOR ballad which just does not showcase her. Previous duet partner Barbara Mandrell joins Lee for ‘I’d Give Anything’, another dull ballad. Marie Osmond’s pristine vocal on ‘It Wasn’t Love Before’ has phrasing from musical theater.

This is generally a fairly strong album with something for everyone.