EP Review: Erin Enderlin – ‘Tonight I Don’t Give A Damn’

Leave a comment Posted by Occasional Hope on April 30, 2019 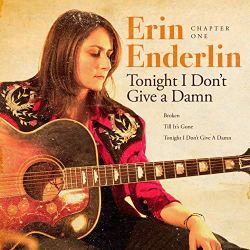 Erin Enderlin is developing into the best storyteller in country music today. Her latest EP builds on ‘Broken’, one of the songs on her last album, the acclaimed Whiskeytown Crier, and apparently continues its heroine’s story (although to be honest I wouldn’t have realised it was intended to be the same story without having been told). She has also created videos for each of the three songs.

‘Broken’ relates the woman’s early adult life without self-pity, marrying an abusive man at 18 and repeating the pattern of both their families. She decides to break the cycle by giving up her own baby for adoption, a brave but heartbreaking decision. Steel guitar weaves through the song adding its melancholy underpinning.

In ‘Till It’s Gone’, also from Whiskeytown Crier and written by Erin with Jon Randall and Jim ‘Moose’ Brown, we see her holed up in a motel room after leaving her man, drinking and smoking while reflecting on her choices.

The title track, ‘Tonight I Don’t Give A Damn’ is actually the only new song, and is a co-write with Brown and Jessi Jo Dillon. The narrator is unhappily married and contemplating a one stand to a Gene Watson soundtrack, despite knowing it will make her feel “more alone than I already am”. It is another melancholy steel-aced ballad, beautifully sung by Erin.

A further three EPs are intended to follow this year. In the meantime, the new song is well worth downloading.