Album Review: Hayes Carll — ‘What It Is’ 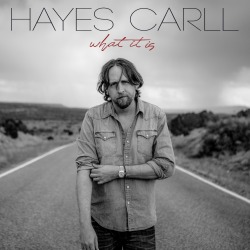 One listen to Hayes Carll’s What It Is and it becomes abundantly clear he’s using these twelve songs, his first new music in three years, to express himself fearlessly. The album is a split personality with one parts love, Carll is engaged to Allison Moorer, whom he plans to wed later this year, and one parts social commentary.

Not surprisingly, it’s the latter that wins the fight for dominance, and while it may seem repetitive to hear another artist use their music to vent their frustrations, or as Carll puts it “get off the sidelines,” few execute as uniquely and memorably as he does here.

The first of these songs is the solely written “Times Like These,” an effective rocker about our current political climate and how Carll desires “to do my labor, love my girl and help my neighbor while I keep a little hope in my dreams” which he says is “sure getting hard brother in times like these.” Less successful is the eccentric “Wild Pointy Finger,” which begins strong:

It points at the fever and the accomplishes of man

It points at all the problems it don’t understand

It points at Persians across the sea

It points at anybody who thinks differently than me

My wild pointy finger is probably pointing right at you

But dissolves into a bizarre rant weighted down by unwieldily symbolism. He rebounds nicely with the excellent “Fragile Men,” in which he talks directly to those who feel the world is undermining their ideals. Carll turns inward on “If I May Be So Bold,” the record’s thesis statement, where he sings about no longer standing in the shadows:

I’ll make my way if I should be so bold

Bold enough to make a difference

Bold enough to say I care

Bold enough to keep on trying

Even when the wills not there

There’s a whole world out there waiting

Full of stories to be told

And I’ll heed the call and tell ‘em all

If I may be so bold

“Jesus and Elvis,” the album’s best-known song thanks to Kenny Chesney, who included it on Cosmic Hallelujah in 2017, is one of those compositions. The title originated with co-writer Matraca Berg, but the story of the bar and its patrons, which is rich with the tiniest of details, from the “neon cross and the string of Christmas lights” to the camaraderie between “old friends,” is all Carll’s.

He bridges the gap between the album’s two halves on the gorgeous “American Dream,” where he uses everyday observances (summer sunshine, tumbleweeds, dresses on a clothesline waiting for Saturday night) to paint an idyllic picture of his life in Texas. The romantic side of the album, largely bolstered by his romance with Moorer, also his co-producer and frequent co-writer, finds him as relaxed as Johnny Cash in the presence of June Carter.

Carll is at his most tender on the sparse “I Will Stay,” the album’s masterpiece and the essence of true love, a relationship ballad where he vows to be there for Moorer through the good times and the bad. He goes back in time on “Beautiful Thing,” a shot of bluesy adrenaline that details the combustion he felt in the infancy of their courtship.

Although Moorer co-wrote “None’ya” with Carll, the song his tribute to her, his perspective on the woman he’ll soon call his wife. He shares intimate details of their lives together, like how she painted the ceiling of their front porch turquoise in order to keep out evil spirits because it’s “the way we do it the south,” and captures her essence in all its eccentricities with beauty and sensitivity.

Given the self-doubt he hints at in “I Will Stay,” it’s safe to assume Moorer is the one taking the lead on “Be There,” which paints a less than optimistic view of the couple’s relationship. The banjo-driven title track, in which she provides background vocals, serves as a reminder that “what it was is gone forever, what it could be god only knows, and what it is, is right here in front of me, and I’m not letting go.”

Carll’s very character is at the heart of the cautionary “Things You Don’t Want To Know,” which is directed at Moorer and his fans and warns against asking questions that can lead to uncomfortable truths you might not be ready to hear.

What It Is may be a record of two halves, showcasing distinctly different sides of a fascinating and complicated man, but it works as a cohesive whole thanks to Moorer and co-producer Brad Jones, who infuse the album with an urgency that binds the songs together with a softness and aggression that reveal Carll’s unwavering assurance in his ideals.

What It Is is a journey worth taking from beginning to end, with not a single pit-stop along the way.

One response to “Album Review: Hayes Carll — ‘What It Is’”