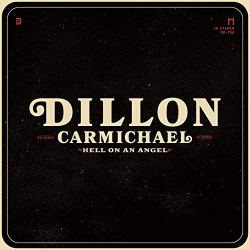 20-something newcomer Dillon Carmichael from Kentucky (a nephew of John Michael Montgomery and Montgomery Gentry’s Eddie Montgomery) has just released his much-anticipated debut album, produced by Dave Cobb for Riser House, an Sony-backed independent label. His family pedigree suggests a mixture of traditional, 90s country and a bit of southern rock, and that is exactly what you get. Dillon co-wrote 8 of the 10 tracks, but the real star here is his rich deep baritone voice.
Initially I was a bit disappointed that it omits last year’s fabulous ‘Old Songs Like That’, a wonderful steel-laced tribute to great country songs of the past which I strongly recommend downloading in its own right. Also jettisoned but available separately is ‘Made To Be A Country Boy’ from early this year, a nice relaxed reflection on the influence of his childhood on him.

The album opens rather unexpectedly with the sound of a tornado warning siren as Dillon then launches into ‘Natural Disaster’, a brooding lonesome ballad about life’s failures. Written by Anthony Smith and Chris Wallin, it is one of only two tracks not co-written by Dillon, but makes for a magisterial introduction. The other outside song, Jon Pardi co-write Country Women’ is a lyrically cliche’d country rock number.

The title track ventures further into southern rock territory on the theme of ‘Mama Tried’, and is really not my cup of tea. ‘Old Flame’, which Dillon did write and is in fact his only solo composition here, is a slow, bluesy number which builds into southern rock.

Much more to my taste, the lead single ‘It’s Simple’ is a pretty ballad about the simple pleasures of life. ‘Dancing Away With My Heart’ is a lovely love song which I liked a lot.

Dillon’s mother helped him write ‘Hard On A Hangover’. This is a very good song about a man’s sneaking round which is punished when his wife leaves him:

I then realized my new-found freedom
And I pawned the wedding rings ’cause I don’t need ’em
And I blew the cash down at the Whiskey Barrel
And then I headed to the house, my honky tonk special

And then I woke to the sound of a tow truck
She said, “That car’s in my name, so you’re out ofluck”
I thought when she left, it was over
That girl sure is hard on a hangover

Even better and more traditional is ‘That’s What Hank Would Do’, a presumably autobiographical song about the life of an aspiring country songwriter which becomes a tribute to Hank Williams, set to a deeply authentic arrangement. This is really wonderful:

I pulled into Nashville writin’ songs for the radio
But chasin’ a sound didn’t work
I had to stick to what I know
And then I asked myself
What would Hank do?
He’d say “In with the old and out with the new”

’Might Be A Cowboy’ is the reflective and convincingly sweet love song of a rodeo rider:

I might be a cowboy, but I’ll never ride away

The record closes with ‘Dixie Again’, a slow bluesy piano ballad about losing and finding oneself:

This is an impressive debut from an artist with a great voice and some strong country instincts.

One response to “Album Review: Dillon Carmichael – ‘Hell On An Angel’”