Leave a comment Posted by Jonathan Pappalardo on October 2, 2018 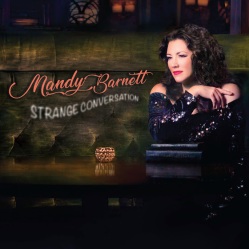 The last time we heard from Mandy Barnett was 2013, when she released I Can’t Stop Loving You: The Songs of Don Gibson. It’s taken five years for her to follow it up and she does so with an album that finds her exploring uncharted territory in her 22-year career.

As Barnett puts it frankly, Strange Conversation isn’t a country album. She recorded it in Muscle Shoals, and through inspiration from the area’s classic sound, she plays instead under the umbrella and within the sonic textures of modern-day Americana and she’s enlisted drummer Marco Giovino and guitarist Doug Lancio to serve as her producers. The former has worked with Robert Plant and Buddy Miller while the latter has collaborated with John Hiatt and Patty Griffin.

Strange Conversation opens with “More Lovin,’” an excellent cover of the song originally recorded by Mabel John. The groove, created by a nice mixture of upright bass and crashing percussion, gives the song an appealing jazzy groove. She travels back to the 1960s for her R&B and soul-infused version of “It’s All Right (You’re Just In Love),” which originates with the Alabama-based band The Tams.

“Dream Too Real To Hold” jumps ahead to 1997 and came to Barnett via Greg Garing, who among his many contributions, worked with Kenny Vaughn to revitalize Lower Broadway in Nashville some time ago. It’s another excellent song, with nice jazzy undertones. The title track is a pleasant ballad which finds Barnett turning in a sultry vocal performance.

The album continues with “A Cowboy’s Work Is Never Done,” originally recorded and released by Sonny & Cher in 1972. Barnett mostly keeps the song within the same vein as the original, retaining Hiatt to sing on it with her. They work fine together and the lyric is good, but I hate the fuzzy and cluttered arrangement, which unnecessarily drowns them out. I know it’s in keeping with how the song was intended when written, but it’s very unappealing to my ears.

Tom Waits originally released “Puttin’ On The Dog” in 2000. The lyric, a sexual innuendo, is slinky and the song is downright obscure. Like the Sonny & Cher cover that preceded it, it’s also not to my taste. “All Night” is pure lounge and torch, as though it comes straight from an old smoky jazz club. It fits perfectly within Barnett’s classic wheelhouse.

Neil Sedaka pitched “My World Keeps Slipping Away” to Barnett directly. She evokes Rosanne Cash, who I could easily hear covering this song, on the sparse ballad, which she knocks out of the park. “The Fool” is not a cover of the Lee Ann Womack classic, but rather a tune written by legendary country and pop singer Lee Hazlewood. The barroom anthem, one of the album’s best tracks, revives Barnett’s classic sound and gives the latter half of the Strange Conversation some much-needed pep and variety. She closes the ten-track album with a cover of Andre Williams’ “Put A Chain On It,” a slice of straight-up R&B that features backing from the McCrary Sisters.

Besides insisting Strange Conversation isn’t a country album, which it most certainly is not, Barnett also says it purposefully doesn’t rely on the full-power of her voice. This choice, which makes use of her sultry lower register, gives the music a different feel from her previous albums, which I like. I certainly appreciate Barnett’s artistry and feel the end result is the album she set out to make. The tracks are on YouTube and I highly recommend you go check out the album for yourself.