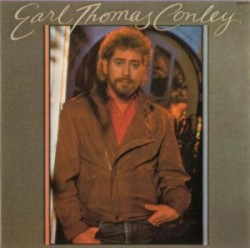 Earl Thomas Conley released his fourth album, and third for RCA, in May 1983. Don’t Make It Easy For Me, produced as per usual by ETC and Nelson Larkin, was his most successful album to date, with all four of its singles hitting #1. This was the album that kicked off his successful string of nine consecutive number one hits between 1983-1986.

The album’s first single, “Your Love’s On The Line” was co-written by ETC and Randy Scruggs. The excellent mid-tempo ballad is smooth and hardly country, but Conley sells it with conviction.

He didn’t write his next single, which is arguably his signature song. “Holding Her and Loving You” is an incredible lyric about a conflicted man who must tell his wife he’s in love with his mistress. Conley does the impossible, which is to allow the listener to sympathize with our protagonist’s struggle. His emotion-filled vocal elevates the already great song to new heights.

The next single, the title track, changes the pace and adds a heavy electric guitar to give the track some muscle. The song is very dated and in retrospect, shouldn’t have been a #1 hit at all. I would file this away as one of those songs you couldn’t believe were once considered radio-friendly enough to be a hit. It’s just strange and not to my taste at all.

The fourth and final single “Angel in Disguise” is another wonderful song, this time about a man who finds his fling has turned out to be something more. Go ahead and watch the video on YouTube. It’s hideous but worth the chuckle. I’m glad it exists as an example of the era, but boy is it bad.

Another song from the album given the video treatment is “Crowd Around The Corner,” which is very good, although the video is slightly creepy. “You Can’t Go On (Like A Rolling Stone)” is a bland AC-leaning cautionary tale about a guy who cannot go on living his life as a playboy.

“Ball and Chain” is a charming rocker while “Under Control” maintains the fast beat but adds a heavy synth track into the mix. “Changes of Love” is classic, yet unremarkable, ETC and “Home  So Fine” is the most traditionally structured country song on the album.

Don’t Make It Easy For Me is the embodiment of a country album smack dab in the center of the Urban Cowboy era of country music. It’s so early 1980s and while it undoubtedly worked at the time, it’s aged poorly in the 35 years since its release. “Holding Her and Loving You” is the album’s most worthy and stand out track by a mile. The album is available to stream on YouTube, with all the music videos included, which I highly recommend checking out.

2 responses to “Album Review: Earl Thomas Conley — ‘Don’t Make It Easy For Me’”