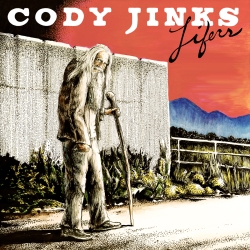 I was very impressed by Cody Jinks’ 2016 release I’m Not The Devil https://mykindofcountry.wordpress.com/2016/09/07/album-review-cody-jinks-im-not-the-devil/ So was the highly esteemed independent label Rounder Records, which signed Jinks on the strength of it. His debut record for Rounder has just been released. I don’t like it as much as I’m Not The Devil, and it leans less to country, but it is a strong effort in its way.

Lead single ‘Must Be The Whiskey’ is a mid-paced song about a man unsure whether he should have settled down or run away. The arrangement is a bit busy and the melody rock-influenced, but the whole is quite catchy. Musically similar is the opening ‘Holy Water’. This revisits the theme of duality and struggling with darkness and sin which dominated the previous album, and is a good song although not quite sonically to my taste.

Much better is my favorite track on the album, ‘Somewhere Between I Love You And I’m Leavin’’, a beautiful sounding measured ballad which is a love song despite itself. My second favorite is the lovely ‘Colorado’. A wistful ballad of regret for a failed marriage, it is the most traditional sounding song on the album.

The title track is a sincere and likeable tribute to the hard working strivers of an older generation who refuse to give up despite the discouragements of life.

‘Big Last Name’ is a tongue in cheek song about an ambitious young woman who aims to marry money. I enjoyed this one. ‘Can’t Quit Enough’ is an energetic and unrepentant ode to the joys of life on the road and the narrator’s many bad habits.

‘7th Floor’ is a minor keyed song with a 60s folk-rock feel and an obscure lyric. ‘Desert Wind’ is a Western story song. ‘Stranger’ is an introspective Billy Don Burns song about the shock of realising one has grown old. The closing ‘Head Case’ also reflects on age and mortality, with a suitably somber cello-led accompaniment.

Overall, I was disappointed in the musical direction of this album, which draws more strongly on Jinks’ rock past, but it has some strong tracks worth hearing.