The History Behind ‘Fox On The Run’ 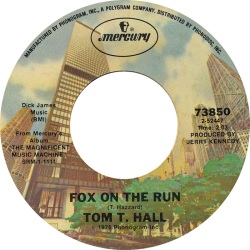 While typically most country and bluegrass songs originate within the genre, occasionally a song arrives from other sources. Willie Nelson had a segment of his career in which he introduced a bunch of pop standards to country audiences.

Probably the most unusual song to enter the genre was “Fox On The Run”, written by an Englishman, Tony Hazzard and originally made a pop hit in England by an early version of the rock group Manfred Mann back in 1968. On at least one of the four British charts (three pop magazines, plus the BBC), the song reached #1 (it was at least top five on the other three pop charts) plus the song did well throughout much of the English speaking world reaching #1 in New Zealand, #7 in Australia and also went top ten in Germany, Netherlands, Norway and Sweden. It also reached #15 in Austria. In the US and Canada, the song barely cracked the top 100.

As recorded by Manfred Mann, the song sounds nothing like bluegrass, but as I listened to the song while living in England in 1969, I thought that the lyrics sounded like a country song, and was surprised to find that the songwriter was not an American. In fact, Tony Hazzard sang vocal harmonies on the Manfred Mann recording and had written several other songs that were hits for Manfred Mann.

Apparently, others heard the song as I did for by the time I arrived back in the US in the fall of 1971, the bluegrass duo of Bill Emerson & Cliff Waldron had already recorded their version, followed shortly thereafter by the County Gentlemen bluegrass group. Neither of these records received much airplay on country radio but the song was played on stations that played folk and/or bluegrass.

The song finally became familiar to country audiences when Tom T Hall released it as the single from Magnificent Music Machine, the album in which Tom ‘came out of the closet’ and revealed his undying love for bluegrass.”Fox On The Run” received much country airplay and reached #9 on Billboard’s country chart.

Below I’ve printed the lyrics as sung by Tony Hazzard, a fine singer in his own right. The lyrics that are underlined are sung by Tony but do not appear on any of the other recorded versions (as far as I know).

She walked through the corn leading down to the river,
Her hair shone like gold in the hot morning sun.
She took all the love that a poor man could give her
And left him to die like a fox on the run.

Now everybody knows the reason for The Fall,
When woman tempted man in Paradise’s hall.
This woman, she tempted me and she took me for a ride,
And, like the weary fox, I need a place to hide.

It was many years ago, but it feels like yesterday,
When she led me through the corn on that fateful summer day.
I saw the sunlight in her hair; I saw the promise in her eyes;
And I didn’t even care that her words of love were lies.

Come raise your glass of wine and fortify your soul;
We’ll talk about the world and the friends we used to know.
I’ll illustrate a girl who wandered through my past.
She didn’t care to stay; the picture cannot last.

Just read these lyrics and tell me that this is NOT a country or bluegrass song!