Leave a comment Posted by Occasional Hope on May 8, 2018 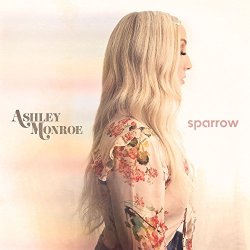 It’s often particularly disheartening when an artist one has seen as a bright spot in a generally dismal music scene changes his or her style significantly. In the case of Ashley Monroe’s latest album, we can’t ascribe it to selling out as I can’t really see this new style getting her any more radio interest than her more traditional country music. Dave Cobb’s production is not only not remotely traditional, I find it hard to detect anything recognisably country at all on most of the record. She admits herself that she doesn’t know what genre this album might fall into. To my ears it draws on later 1960s pop with heavy use of strings and an almost psychedelic sound, shading into 70s Glen Campbell-Jimmy Webb arrangements. That’s not to say that it’s a bad record per se, just not what I was personally hoping for.

Lead single ‘Hands On You’ (a co-write with Jon Randall), a sexy, sultry song of regret for an encounter that never happened, has a hypnotic quality which grew on me somewhat over repeat listens. Randall also co-wrote ‘I’m Trying To’ with Ashley and Kassi Ashton, a pensive low key ballad about pretending a breakup isn’t hurting. This is one of the tracks I do like quite a bit, and the production is at least fairly restrained.

The two best songs come at the end of the set. Ashley wrote ‘Daddy I Told You’ with her Pistol Annies bandmate Angaleena Presley and Josh O’Keefe. It is a poignant message to Ashley’s late father, who died when she was only 13, set to a gentle melody. ‘Keys To The Kingdom’, a co-write with Waylon Payne, has a similar reflective vibe with a dreamlike poetic lyric.

The pretty sounding but lyrically incisive ‘Mother’s Daughter’, written with Brendan Benson and Ryan Beaver, which paints a portrait of a woman who cannot sustain a relationship.

The backings tend to overwhelm otherwise strong songs like the mid-paced ‘Hard On A Heart’ which is just too busy. ‘Wild Love’ is plain dreary underneath its dramatic sweeping strings, as is ‘Paying Attention’. ‘She Wakes Me Up (Rescue Me)’, addressed to Ashley’s daughter, is also rather dull and not at all country sounding.

‘This Heaven’ (written with Miranda Lambert’s ex Anderson East and Aaron Raitiere) has a subdued churchy arrangement which is quite nice.

‘Orphan’, written with Moak and Gordie Sampson, the song which provides the album title, has a mournful underpinning and another poetic, questioning lyric. Ashley’s voice soars beautifully over the solemn cello-dominated arrangement. ‘Rita’, written with Nicole Galyon and Paul Moak, has a similar vibe.

Ashley’s songwriting is stronger than ever, and I like her sweetly vulnerable vocals here too. But the arrangements are really not to my taste, and I doubt I will revisit this album much. Gie it a try to see if it works for you.