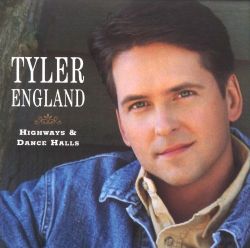 Ty England released his third album in the fall of 2000. The record, his first and only on Capitol Nashville, was produced by Garth Brooks. The album spawned three singles, none of which even made a dent on the charts. Highways & Dance Halls found England recording as Tyler England for the first time.

The mid-paced “Too Many Highways” and similarly mid-tempo “I’d Rather Have Nothing” both failed to chart. They were sandwiched between “I Drove Her to Dallas,” which bottomed out at #53. The middle single, the only true ballad of the group, was the best of the bunch.

The album includes a pair of songs written by Bruce Robison. “She Don’t Care About Me” has an engaging melody and nice traditional production. The other one is “Traveling Soldier,” which of course was made famous by Dixie Chicks three or so years later. England’s version is very good, but I didn’t care for the intrusive background singer on the chorus.

Three of the album’s songs would also appear on Brooks’ own The Lost Sessions in 2005. “My Baby No Está Aquí No More” has wonderful production but a hideous rhyme scheme. The other two were the aforementioned “She Don’t Care About Me” and “I’d Rather Have Nothing.”

“Collect From Wichita” is a pleasant and “I Knew I Loved You” is engaging. “Blame It On Mexico” is a cover of the George Strait song from 1981. England closes out the album by reprising “Should’ve Asked Her Faster” in collaboration with Steve Wariner.

Highways & Dance Halls is a very good album with a strong sense of song and wonderfully traditional production from Brooks. The weak link here is England, who lacks the personality vocally to elevate these songs and create worthy moments. He’s a wonderful singer, which he more than proved on his RCA releases, but everything here is too clean, neat and precise.