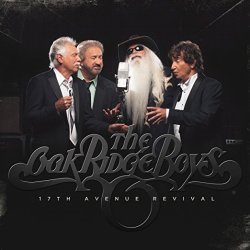 The Oak Ridge Boys started out as a gospel quartet, and after many years in country music have returned to their roots for this latest album, produced by Dave Cobb.

In many ways this is more of a traditional southern gospel record than a country one. It’s pretty good in that respect, although the guys’ advancing age is rather obviously showing in their vocals, particularly on the solos, although the harmonies are still stirring and they still have plenty of energy.

The opening ‘Brand New Star’, a rousing farewell to a deceased friend, is still highly enjoyable despite the vocal deficiencies. I also quite liked the traditional ‘Walk In Jerusalem’. The upbeat ‘God’s Got It, however,’ is a bit too bluesy for my taste.

‘There Will be Light’, written by Jamey Johnson, Buddy Cannon and Larry Shell, is a slow, churchy ballad with piano accompaniment. There are reverent takes on the Southern gospel hymns ‘I’d Rather Have Jesus’ and ‘Where He Leads Me I Will Follow’ which are quite effective.

A cover of Brandy Clark’s ‘Pray To Jesus’ sounds great musically with some fabulous Jerry Lee Lewis style piano and the best vocals on the album, but the semi-ironic lyrics feel out of place on this project.

Much more appropriate is the record’s most country track, Vince Gill’s Ashley Monroe co-write ‘If I Die Drinkin’’, which is emotionally sung with a gentle piano-led arrangement. This is excellent.

Also good is a cover of folk-blues legend Leadbelly’s ‘Let It Shine On Me’, which makes for an effective closing track.

One final note of disappointment: there are only nine tracks, and a total playing time of less than half an hour.