Leave a comment Posted by Occasional Hope on February 28, 2018 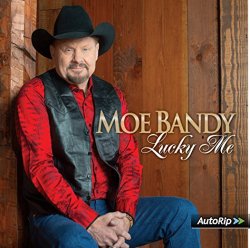 Moe’s most recent album was released in 2016, and shares a title with his new autobiography. Produced by Jimmy Capps, the record is as solid traditional country as you would expect from Moe, although his voice is showing signs of age. In fact, many of the musicians played on Moe’s classic hits, like Hargus “Pig” Robbins.

‘I’ve Done Everything Hank Williams Did But Die’ is not the similarly titled song recorded but not released by Keith Whitley, but it is an excellent Bill Anderson song which evokes the spirit of Hank and his music both in the lyrics with their borrowings of Hank song titles, and the authentic arrangement with its Drifting Cowboys style steel.

‘Hell Stays Open All Night Long’ is a cover of a song cut by George Jones in the 90s. Moe is not up to the same standard as a vocalist, so his version definitely falls short in comparison, but it is a great song nonetheless, and Moe sings it with emotion. The Oak Ridge Boys provide (fairly subdued) backing vocals on this track, as they do on the closing ‘A Place To Hang My Hat’. This is a fine religious song about anticipating death, which Porter Wagoner included on his final album. A really lovely fiddle and steel arrangement adds the final touch.

Riders in the Sky help out on a couple of cowboy themed tunes. The tribute ‘Long Live The Cowboy’ is a nice song although Moe’s voice sounds a bit weathered – perhaps not inappropriately for the subject. ‘That Horse That You Can’t Ride’ was previously recorded on Moe’s 1984 album Motel Matches, and is about responding to romantic heartbreak, using the cowboy as a metaphor.

Ricky Skaggs guests on the pretty mandolin-ornamented ‘The Rarest Flowers’, a remake of a song Bandy recorded on 1989’s Many Mansions, about a mountain girl who fades in the city.

‘It’s Written All Over Your Face’ is a rare Moe Bandy co-write, a sad song with a pretty melody. ‘Old Frame Of mind’ is a shuffle about failing to shake off an old memory.

The title track is a sunny Western Swing love song. ‘That’s What I Get For Loving You’ is a another love song, a not particularly memorable mid-tempo number. ‘It Was Me’ is a mellow romantic ballad.

While Moe’s age is showing, this is a strong collection of songs, which is worth checking out. Some versions of the album (i.e. the CD sold on Amazon) have three added bonus tracks, but these were not on the version I downloaded.