Leave a comment Posted by Jonathan Pappalardo on November 30, 2017 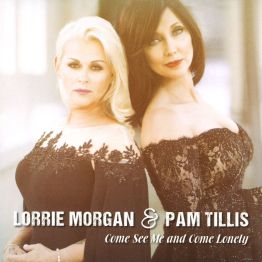 Come See Me and Come Lonely, Lorrie Morgan & Pam Tillis’ second collaborative album, is strictly a covers record with their version of twelve classic country songs ranging from the familiar to the slightly obscure. I didn’t even have an inkling this record was in the works, so count me among the pleased, and surprised when news broke about the impending release this past summer.

The album was produced by Richard Landis, who has handled the majority of Morgan’s production duties for more than 25 years. While he maintains the essence of each song, he updates the arraignments just enough to give the album a contemporary flair that allows the album to feel modern and not note-for-note recreations of the classic recordings from which these compositions are most known.

His choices result in a very good album that unfortunately begins with K.T. Oslin’s romantic ballad “Do Ya” sung as a duel-lead duet. The results are ridiculous but Tillis does bring vigor to an otherwise lifeless song. I had no idea what to expect from another seemingly random choice, Dwight Yoakam’s “Guitars, Cadillacs.” They handled the song with ease, as though it was born from a Nashville honky-tonk.

Skeeter Davis’ version of “The End of the World” has always been too schmaltzy and slightly comedic for my twenty-first-century ears. Morgan and Tillis’ interpretation is gorgeous and brings the underlying heartbreak in the lyrics to the forefront. “It Doesn’t Matter Anymore” is similarly excellent and a brilliant nod to Tillis’ sound and style from the early 1990s.

The title track is brilliant and actually improves upon the version Dottie West released in 1978. I like their rendition of “Walk Right Back” and love how the emulate the Everly Brothers with their close-knit harmonies.

Morgan all but knocks Sammi Smith’s “Saunders Ferry Lane” out of the park, but I’ll always wonder how it would’ve sounded without so much age on her voice. “Rose In Paradise” is a southern gothic beauty, anchored masterfully by Tillis. My favorite track on the album is “Summer Wine,” presented as a duet with Darryl Worley and an almost unrecognizable Joe Diffie.

Tackling anything written and sung by Roy Orbison is a feat and Morgan and Tillis fall short on “It’s Over,” which just isn’t to my tastes at all. An acoustic take on “Blanket On The Ground” would’ve allowed Morgan and Tillis’ harmonies to shine, whereas the version they gave us drowns them out with obtrusive clutter.

Come See Me and Come Lonely isn’t a perfect album but there are some stunning performances throughout. Morgan and Tillis are on top of their artistic game even if the arrangements are too loud on occasion. I highly recommend checking this one out.