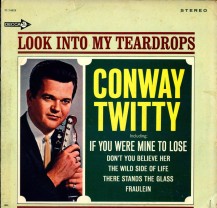 Look Into My Teardrops was the second album Conway Twitty released in 1966, as well as his second release for Decca Records. The album consists of many covers of then-popular hits, as was the tradition at the time.

The album produced two low to mid charting singles. The title track, which peaked at #36 is a lovely mid-paced number co-written by Harlan Howard. “I Don’t Want To Be With Me,” a wonderfully catch up-tempo number with an engaging melody, was self-penned and hit #21.

Nat Stuckley’s “Don’t You Believe Her” was recorded by both Ray Price, with whom it is most associated, and Gene Watson. Twitty’s version is excellent, although I would hardly recognize it’s him singing if I didn’t already know.

“Almost Persuaded” had been a signature #1 hit for David Houston that same year. Twitty’s take on the steel-drenched ballad is excellent. The same is true for “I Made Her That Way,” co-written by George Jones. Twitty also included Jones’ “Take Me,” which is as good as one would expect.

Twitty follows with his fabulous take on “The Wild Side of Life,” which Hank Thompson had made iconic fourteen years earlier. “There Stands The Glass” is arguably one of the hardest country songs to sing and Twitty, unsurprisingly, knocks it out of the park.

“If You Were Mine To Lose,” the album’s other Twitty original, is very good. If you’ve been following our #1 singles this week in country music history posts, then you know Bobby Helms had a massive #1 with “Fraulein” sixty years ago this year. Twitty reprises it here, with smashing results.

Howard’s “Another Man’s Woman” is an additional track original to Twitty. While very good, the song is far from iconic. The album closes with “Before I’ll Set Her Free,” which falls along similar lines, but with a very engaging lyric.

As far as albums from the 1960s that I’ve reviewed go, Look Into My Teardrops is one of the better ones. Twitty does a wonderful job throughout tackling both iconic and new songs. I highly recommend seeking it out if you’ve never heard it.

4 responses to “Album Review: Conway Twitty – ‘Look Into My Teardrops’”