Album Review: Kenny Rogers – ‘Eyes That See In The Dark’ 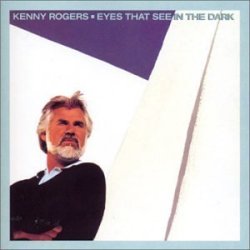 In 1983 Kenny jumped ship from Liberty and headed to a lucrative new deal with RCA. His first album for the new label headed even further down the pop road, including recruiting British disco star Barry Gibb (of the Bee Gees) as his producer and songwriter.

There was one monster hit from the album which is still familiar today. ‘Islands In The Stream’, one of the Gibb songs, was originally recorded solo, but Kenny was not initially happy with the results. Then someone had the brilliant idea to turn it into a duet with Dolly Parton, who was also trying to marry pop and country stardom at the time. It stormed country, pop and AC charts, and was a hit internationally as well – understandably so, as it is a great pop song with a catchy melody, which has nothing to do with country music but has achieved classic status. The duet pairing would go on to tour together, record several albums together including a Christmas effort, and is more familiar to the general public than Dolly’s early partnership with Porter Wagoner.

But if this song could not be ignored, country radio was more circumspect with the following singles. The title track, a boring pop ballad with strangely echoey vocals apparently copied from Gibb’s demo, peaked at #30 on the Billboard country chart. ‘This Woman’ was a #2 AC and top 30 pop hit, but was too disco for country radio, which instead played the more country sounding B Side, ‘Buried Treasure’. This is a pleasant mid-paced love song with banked harmonies from the Gatlin Brothers saving it from being completely forgettable. The Gatlins also back up Kenny on the final single, ‘Evening Star’. This is actually quite a nice song with an inspirational Western theme, and the single peaked just outside the top 10.

AC leaning ballad ‘You And I’ (featuring Barry Gibb’s harmonies) was not a single, but it became a staple of Kenny’s live shows; I find it rather dull and find Kenny’s vocals a bit whispery. ‘Hold Me’ and ‘I Will Always Love You’ (not the Dolly Parton classic but another Gibb brothers’ pop song) are in a similar vein.

The Bee Gees (Barry Gibb and his brothers) provide the backing vocals on ‘Living With You’, a generic disco track with nothing to interest the country fan. ‘Midsummer Nights’ is a mid paced sexy love song.

‘Islands In The Stream’ is really the only good song on this album.

4 responses to “Album Review: Kenny Rogers – ‘Eyes That See In The Dark’”