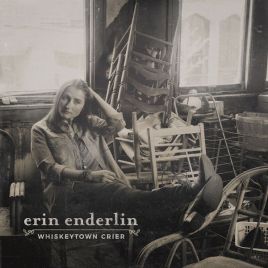 “Ain’t It Just Like A Cowboy,” is a “stop me if you’ve heard this one” tale of a woman jilted by a man who repeatedly abandons her. But Erin Enderlin and her co-writer Heather Little turn the concept on its head. The song isn’t about rodeos, but rather another more universal pain:

God I should know better than to cry

The steel-adorned ballad serves as the lead single from Whiskeytown Crier, which finds Enderlin teaming with Jamey Johnson and Jim “Moose” Brown on a collection of songs culled from the female perspective, of the women who inhabit a fictional residential area known as Whiskeytown. Enderlin imagines the album as a newspaper, with the songs serving as the articles.

Whiskeytown Crier consists of many songs where the woman is in various states of dealing with the man who’s left her. He’s a cowboy one minute, the next he’s the self-absorbed litterer at the heart of “Jesse Joe’s Cigarettes,” which she smokes since she has nothing better to do. The feelings are so complex that to deal with them requires a “Whole Nuther Bottle of Wine.” “Till It’s Gone” finds her maxing out on all these pleasures, accented with a stunning twenty-nine-second steel guitar solo.

Her solely-penned “Broken” is a stunner of self-awareness that acts as a prequel of sorts, detailing the woman’s marriage at eighteen to the man who saw in her what she saw in him:

From a crooked family tree

“The Coldest In Town” is a spellbinding duet with Randy Houser that details a disintegrating marriage from both perspectives. It could be the woman from “Broken” when her life falls apart, but it also works as a standalone composition.

The album also contains two muscular southern gothic murder ballads. “Caroline” is the sadistic tale of a teenage pregnancy and a father’s revenge on the man who made her a mother. “Baby Sister” shows blood is thicker than love, with a shocked sibling proclaiming:

I knew you were a pistol

But I never knew you owned a gun

“The Blues Are Alive and Well” purposely evokes Merle Haggard. “Home Sweet Home” finds a woman enjoying the pleasures of the United States – a game at Wrigley Field, Broadway Shows – but finding comfort in her southern roots, where she prefers to live. “His Memory Walks on Water” is a tale of innocence – a little girl remembering her dad, a degenerate, in death as the man he never was on Earth. To his youngest daughter, though, he was everything.

Enderlin also included two covers to round out the set. She turns in a competent reading of “Till I Can Make It On My Own,” which is very good but could’ve been more subtle. Her take on Gram Parsons’ “Hickory Wind” is excellent.

Whiskeytown Crier is a very fine album that could’ve stood less intrusive production on occasion, namely eliminating the intrusive electric guitar that permeates “Jesse Joe’s Cigarettes.” But the music shines through, putting the focus on Enderlin’s apt storytelling, right where it should be.