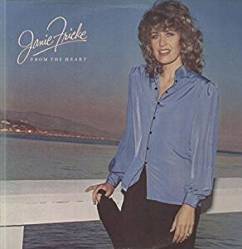 Janie Fricke’s third Columbia album (her last to be produced by Billy Sherrill) was only modestly successful. It bears all the hallmarks of its era, but on the best tracks Janie’s beautiful voice shines through. This makes the record’s shortcomings all the more frustrating, as it is so evident that she could have done so much better.

There were two top 30 singles. The first, the very poppy mid-tempo ‘But Love Me’, is marred by horribly intrusive production which makes an otherwise harmless peppy number unlistenable. Infinitely better is Janie’s version of the classic ‘Pass Me By (If You’re Only Passing Through)’, which is truly excellent.

Another highlight is the traditional country ballad ‘One Piece At A Time’ (surprisingly written by Randy Jackson). Addressed to the protagonist’s ex, the singer proudly explains how her true love has healed the hurt and banished the memory of her predecessor:

‘Some Fools Don’t Ever Learn’ is another very good song with a strong vocal, although some aspects of the production sound dated today.

Unfortunately most of the rest of the album is disposable pop- country, with Janie’s vocals all too frequently breathy and undersung, and songs like ‘Falling For You’ boring and with little or nothing about them one might describe as country.

The vocals are much stronger on ‘My World Begins And Ends With You’, but the song itself is syrupy and bland and the arrangement dated.

‘A Cool September’ (written by Billy Sherrill and Glenn Sutton) is a heavily orchestrated loungy jazz number which Janie sings quite well, but not in a country style at all. The biggest disappointment is with Janie’s lackadaisical cooing treatment of the standard ‘When I Fall In Love’; she has the vocal chops to really deliver on this song, but she fails to dive it any oomph at all. She seems to be trying too hard to sound pretty to invest it with any real emotion. The same goes for . ‘This Ain’r Tennessee And He Ain’t You’ is a good song which sounds a little too much like something from musical theater – carefully and thoughtfully delivered, but a little detached from the song’s raw emotion.

Reba McEntire, another rising star but one who would soon surpass Janie, also recorded ‘Gonna Love Ya (Till The Cows Come Home)’. Janie’s version is pretty but forgettable and lacking in passion.

There were glimmers of potential in this album which pointed to something significantly better than the sum of the album.

One response to “Album Review: Janie Fricke – ‘From The Heart’”