Album Review: ‘The Little Darlin’ Sound of Johnny Paycheck: In The Beginning’ 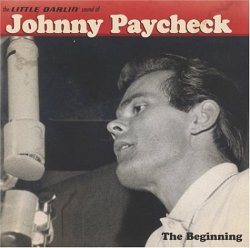 Released in May 2004, In The Beginning was the first in Koch Records’ series of reissues of Johhny Paycheck’s Little Darlin’ recordings. Founded by Paycheck and his producer Aubrey Mayhew, Little Darlin’ Records was Paycheck’s label from the mid-1960s until the end of the decade when it ceased operations. Paycheck’s Little Darlin’ years were only moderately successful, yielding one Top 10 hit (1966’s “The Lovin’ Machine”) and two more Top 20 hits (1966’s “Motel Charlie” and 1967’s “Jukebox Charlie”). None of those tracks are included on this disc, nor is Paycheck’s best-remembered record from that era, “A-11”, which topped out at #26 in 1965. I suspect that the 15 recordings on this disc may have been the first he recorded but not necessarily the first to be released.

Although nothing here rises to the level of a classic, all of the songs are well-crafted and enjoyable, which is in no small part due to the contributions of the legendary Lloyd Green whose steel guitar is prominent on most of the tracks. Most of these songs are hardcore honky-tonk, without any of the Nashville Sound trappings (vocal choruses, strings) that were typical of the mid to late 1960s. The influence of George Jones and 1950s Ray Price (whose band Paycheck was am member of at the beginning of his career) is readily apparent throughout the disc.

The album’s opening cut is the George Jones-esque “Don’t Start Countin’ on Me”, followed by “The Girl They Talk About”. “High Heels and No Soul” at first seems to be another take on the oft-visited shoes metaphor (i.e., Billy Walker’s “Charlie’s Shoes” and Patsy Cline’s “Shoes”) but it takes a different course and talks more about the subject’s demeanor rather than her footwear. It’s one of the album’s best tracks, as is “Don’t You Get Lonesome” which features a double-tracked vocal effect. “With Your Wedding Ring in One Hand (and a Bottle in the Other)” is another favorite. Not as enjoyable is “Passion and Pride”, which isn’t a bad song but I just can’t get past the similarity of its melody to Porter Wagoner’s “A Satisfied Mind”.

“Columbus Stockade Blues” is a bit of a change of pace, with a rockabilly feel that is more reminiscent of Conway Twitty than George Jones, but the album’s real outlier is Paycheck’s cover of “Galway Bay”. Popularized by Bing Crosby in 1947, the song is almost always performed with an orchestral arrangement. Although Paycheck’s version will have some screaming cultural appropriation, he does a decent job singing the song. However, this is one time the pedal steel seems a little out of place. It’s the only real misstep on the album, material-wise. A bigger problem is the audio quality, which is somewhat lacking throughout. Koch put little or nothing into remastering these tracks, but although they could have benefitted from some digital clean-up, they do not sound so poor to render the album unlistenable.

As someone who is more familiar with Johnny Paycheck’s later years, all of these recordings were new to me. In an age when new worthwhile country music is hard to come by, it’s always a treat to come across something one hasn’t heard before, even if it is decades old. While only hardcore fans will likely buy the album (used CD copies or digital download) more casual listeners may want to stream it.